On Tuesday evening we stayed at a hotel in Nikko.  The hotel combined features from a western hotel and a Japanese guest house. Our bedroom reflected both styles.  One half had carpet, beds, a desk, and a TV, the other half had tatami mats,  Japanese cushions, a tea table, and space for futons. 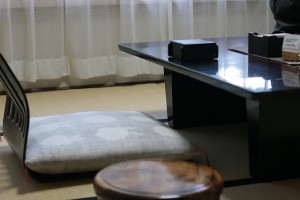 In the countryside restaurants close very early and we decided that it would be more convenient to eat at the hotel.  The meal probably cost more than the room as they were serving kaiseki ryori, the Japanese version of haute cuisine.  When we first moved to Japan I avoided this sort of food as I could rarely work out what I was eating and at times even how to eat it.  I assumed that by now I wouldn’t be surprised by the food I was served, but I was wrong.

We were given 13 courses, four of which we could choose ourselves.  I’m not very good at recognising types of fish from pictures so I will admit that for one of the choices I just pointed at a picture and hoped for the best.  We were served tofu, tempura, pickles, grilled fish, steak, beef stew, and soba, all of which I have eaten before. The third course was sashimi, raw fish. This was the course that I picked from the pictures.  The waitress had two plates, one with sea trout and the other with something I thought she called “dreaming fish”.  I picked the sea trout as I don’t really like looking at fish heads, and the dreaming fish had the whole body of the fish with the sashimi in the middle. 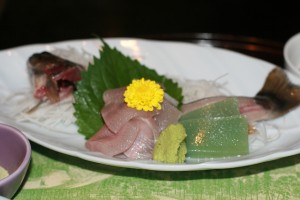 After the waitress put the fish on the table she kept looking at us expectantly.  She pointed at the fish and again I thought she said “dreaming fish”.  We smiled at her, not having a clue what she was waiting for, and then looked at the fish.  It moved.  The head of the fish was moving.  It was then that I realised she had been saying “living fish”.  We were given food that was still moving and continues to move while you eat its cut up insides!  I hope I managed to hide the look of horror on my face.  I could not have eaten that fish, I could barely look at that fish.  After that course the strange stringy stuff in broth, the unknown squishy vegetables, and the rice served in a bowl of tea were incredibly easy to eat – at least they weren’t alive.

On Tuesday morning we hired a car and headed out of the city for a couple of days.  Tokyo is amazing but I wanted to see something different than the concrete jungle.   We drove towards Nikko and the Chuzenji Lake area.  Nikko is about 150 km outside Tokyo and has some beautiful mountains and forests.  When I went to Nikko before it was by train and, although the public transport system is fantastic, it’s not the best way to see a mountain.

Once we got off the Tohoku expressway we drove up through the mountains to the lake.  I loved the drive.  The scary road full of hairpin bends was one-way allowing us to enjoy the drive without being overly worried about other cars. The mountains are spectacular but I found it hard to take any good pictures. 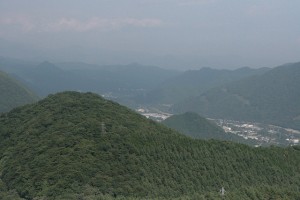 I really like the mountains in Northern Ireland but they are very different than Japanese mountains.  The highest mountain in Northern Ireland, Slieve Donard, is only 850 metres.   Lake Chuzenji is at the foot of Mount Nantai and the lake is about 1,250 metres above sea level!

The other thing I really wanted to see was a waterfall.  I had read about Kegon Waterfall but we didn’t manage to find that on Tuesday.  We did, however, manage to find Yudaki Waterfall. 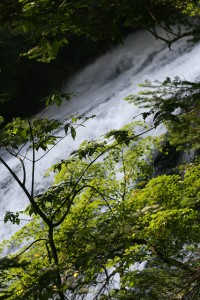 I spent a couple of hours this morning practising my Japanese accent with my teacher.  I am working on a lightning talk for YAPC::Asia.  I don’t know if this talk will be accepted but even if it isn’t this is an interesting learning experience.  Usually it’s a text book that determines what I learn next and not something that I wrote myself.  This can lead to me learning about things that I never use in day to day life and, as a consequence, things I quickly forget.  The talk contains concepts that I actually want to be able to speak about.  With help from a friend I now know the correct way to say “Perl” and “YAPC” in Japanese.  And I also know how to talk about altering clothing.

I am having quite a few problems with my accent.  It’s not terrible when I am speaking normally but speaking in a loud voice amplifies every imperfection.  I am having problems with pitching and with some sounds.  The length of my vowels isn’t always correct and there are sounds that I find nearly impossible to say in combination.

I’m also having problems finding my voice in Japanese.  At times I sound overly girly.  I end up speaking in a higher pitched voice than usual because many Japanese woman have high pitched voices.  It works, in a Japanese context, but my teacher can’t imagine me sustaining it for 5 minutes.  If my voice becomes too low I apparently sound scary and not friendly enough.  I’m not sure where my real voice is hiding but I need to find it before the middle of October.

This weekend I made a Double Orange Cake. It was the first time I made this cake and it turned out really well. It was very light and not overly sweet.  It wasn’t overly hard to make but I did run into problems with the orange.  The recipe called for “the juice of one large orange”.  I didn’t use the whole orange as I thought that it would make the cake too moist.  I much prefer recipes that tell me exactly how much orange juice to use as I have no idea how large a large orange is. 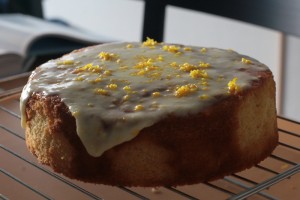 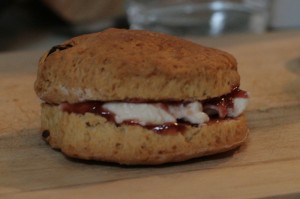 4 Responses to “Happiness is…”

I have a cold.  One of those irritating illnesses that doesn’t seem much of a problem until I try to do something.  Then I start to sneeze, my eyes water, my nose runs, and my temperature rises.  It’s boring and it’s making me grouchy.

I like to make cakes.  I find it fascinating how they change in the oven.  Today I made two cakes before lunch.  I don’t normally do that but I had plans to take them to my friend’s house.  It turned out that I wasn’t able to go but Marty took most of the two cakes with him.  I just have to resist the pieces that he left behind. 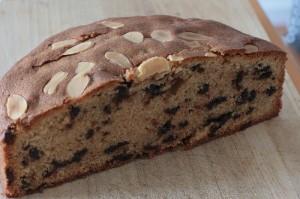 For the past week I have been exercising more than usual.  This appears to be making me hungry.  I’m not really sure what to do about that.  When I’m in Japan I am very careful with my diet and I don’t know how much extra I can eat to compensate for the additional exercise.

The other problem I am having with exercise is the amount of time it takes.  I spent an hour and a half exercising and about another 40 minutes getting ready to exercise and getting cleaned up afterwards. I imagine that I won’t do this much exercise every day, but then I didn’t plan to do the aerobic exercise today.  It seems that exercise may also be addictive.

I haven’t had any problems following my weights program for the past 5 days but day 6 was terrible.  Instead of doing one set of exercises followed by a rest period I got to combine exercises and to work with no rest period.  Marty actually came out of his study to find out what I was doing as he could hear my laboured breathing through the door.  He told me that it’s called supersetting.  I don’t feel at all super and  I am really glad that day 7 involves resting my muscles and stretching.

I should have looked at the structure of this program before starting as Monday would have made a better rest day because the gym is closed. I may not have to lift weights tomorrow but it won’t be that much of a rest day as I still plan to do an hour of aerobic exercise at the gym.

I’m going to be spending September at home so it’s time to get serious about exercising again.  I have a book called “Smart Girls Do Dumbbells” that contains a 30 day plan to improve my muscle tone.  I have learnt how to do most of the exercises but I have never managed to do this work-out for 30 consecutive days.  I’m going to try to do that this month.  This means getting over my shyness at using free weights at the gym.  I have a small set of dumbbells at home but I need a wide range of weights if I want to exercise all my muscle groups and buying them would be silly when the gym has many more than I could afford.

I managed to complete day 1 but I wonder what my motivation will be like a week from now?

(Actually since I’ve had problems with both the network and my blog this week I wasn’t able to post this on Wednesday.  So far I have managed to do this for 5 days in a row.)