I was going to start this post by saying that travelling is no fun.  But that’s not true.  There are lots of aspects of travel that are fun, but getting to the place where the the fun starts can be grim.  At the minute I am in Narita airport.  My flight to London has been delayed for a couple of hours, but at least I get to wait in comfort.  I am feeling a little stressed as I could easily miss my connection to Belfast in London.  And even if I arrive on time to make the connection I could still end up spending the night in Heathrow as British Airways are cancelling flights because of the weather.

Getting to the airport this morning was stressful.  When we arrived at the train platform we had no hope of boarding the train.  It’s hard to explain just how full trains become in Japan.  I have been in other countries where people have complained about the train but you could easily get on and still move your arms and feet when inside.  This train was so full that people’s faces and bodies were smashed up against the doors and windows.  When the train stopped and more people attempted to get in they did this by walking on backwards and pushing as hard as they could.  When that failed they started to run at the passengers who were spilling out of the train to see if that helped to push them further in.  The train was late leaving the platform because people got stuck in the doors.

I could not have gotten into the train on a normal day but trying to do so with a couple of suitcases was a horrific concept.  We ended up buying a ticket for the first class car and waited on another train.  We did not get seats but we were able to at least get on to the train and stand in the corridor beside the doors.  Then we had to get off the train.  The platform at Nippori Station is old and narrow.  It’s really hard to get off a train with the people waiting to get on.  And incredibly difficult in rush hour to walk down the platform to the exits.  To get to the Skyliner we had to walk past the exit that most people want to use and there were hundreds of people pushing and shoving all attempting to not fall off the platform on their way to the stairs.  And I do mean stairs and not an escalator.  I carried my case up the stairs hoping that I wouldn’t get pushed over by the crowd.

After that things got easier.  My train ticket didn’t work but that was fixed by asking for help and did not involve being worried that someone would knock me off the platform.  At the airport there was no queue at all.  I assume that some of the passengers decided to come late because of the delays.  I did managed to get confused again, but that’s because of my understanding of Japanese.  I didn’t understand what was being said to me at the automated immigration gate. Being a foreigner I can sign-up for this service but my passport can’t be read correctly and I have to go through the line that is staffed.  It’s not exactly automated but it’s still quicker and I use it because it means you can ask for no stamp in your passport.  My last passport was filled up in 5 years and I would like this one to last a bit longer.  I asked for no stamp and the person behind the desk just said “sorry, you have stamp”.  It took me much too long to work out that she had made a mistake and stamped my passport before asking if I wanted this or not.  We both did a lot of apologising and I rushed on to the lounge so that I could sit and wait and try to think of something other than travel.  As you can see I failed.

I have been trying to sort out my travel plans for 2013.  Last year I spent 144 days away from home and I don’t want to travel quite that much this year.  Since 2007 I have attended three Perl conferences a year, but I don’t think that I will be able to attend  YAPC::EU this year.  It doesn’t coincide with any family events and it’s expensive to fly to the Ukraine from Tokyo.  Actually, it’s noticeably more expensive to fly to anywhere from Tokyo this year. I do plan to attend YAPC::NA in Austin in June and YAPC::Asia if it is held in Japan. I also want to attend some TPF Community events that should take place in Europe around the time I am there for my aunt’s wedding in May.

Although I travelled a lot last year I didn’t actually manage to have much of a holiday with Marty.  We have been been talking for a while now about seeing more of Asia while we live in this part of the world.  We haven’t been that great at doing that but we have booked a holiday around our wedding anniversary which will take us to China and South Korea.

I started the next level of my intensive Japanese class a couple of weeks ago. It’s utterly brain melting.  I was unsure about doing this as I’m flying to Europe on Monday for a family birthday.  I’m really looking forward to catching up with people but I’m not looking forward to missing two weeks of this term.  I am going to miss a lot of material and I will be expected to somehow cover this myself while travelling.  When I get back I’m also going to have to find time to complete the 10 hours of written homework, the two essays, the three kanji tests, and the two weekly tests that I will have missed.

I didn’t notice the snow this morning.  It’s a national holiday and we had no plans to go out.  Our apartment is on the 24th floor and when I looked out I saw white.  I assumed I was looking at a low cloud and thought nothing more of it.  As the day went on I saw more and more mentions of snow on Facebook so I decided to take a closer look out the window.  The low cloud was actually a blizzard of wet snow.  Our balcony was covered in snow and so it seems was most of the city.  I have never seen so much snow in Tokyo.

I like the way snow looks and I always think that it will be a good idea to go for a walk.  Marty was amused as he had suggested that we go skiing today and I had told him that I didn’t want to go out in the snow.  But I’m not always consistent and walking in the snow seemed very different than travelling to a mountain to get to snow.  I did end up wearing my ski wear as there was a gale blowing and I wanted to be comfortable.  As always it was not easy to walk in the snow.  After about thirty minutes of plodding along the muscles in my legs started to complain.  We had to be very careful near the roads as the cars were having a terrible time getting anywhere and some of them were sliding across crossings when they should have been stopping.

I wanted to take pictures but it wasn’t easy to do that.  Apart from the blizzard making it incredibly difficult to focus correctly the lens didn’t like the change in temperature and steamed up. 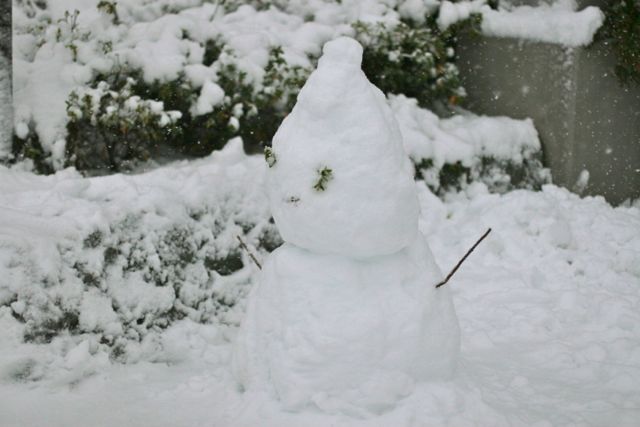 I do hope that the weather improves before I travel next week.  Snow always means delays and many flights were cancelled.  I was amused to read about the train delays in one news article:

Delays of as long as 10 minutes are expected for bullet train services to and from Tokyo.

I do love living in a city where a delay of 10 minutes makes the news.

The start of a year encourages me to think about new things.  I’ve just read Hails’ list of 101 things to do in 1001 days and it reminded me that it was time to create a new list.  It will take me a while to complete this, as I find it hard to come up with 101 things , but I do love the idea. I only managed to put 60 or so things on my last list, but the actual number doesn’t matter so much as the fact that having this sort of a list motivates me.

My lists always end up being dominated by travel.  Last year I managed to see Rome, Seoul and Melbourne, but I haven’t made any holiday plans yet for 2013. I dream of seeing the statues on Easter Island, the Northern Lights, and the Galápagos Islands, but I think it will need quite a bit of planning to actually manage to do that.  On my list I also have the Grand Canyon, the Great Barrier Reef, and Uluru – all places I have started to make plans to see.

There are non-travel things on my list.  I want to improve my Japanese and my ability to write English.  I want to find better ways to deal with my email and my to-do lists as at times I feel like I’m drowning in unanswered email.  I want to learn how to make gluten-free bread as I crave beans and toast. But most of all I want to make good use of the time I have in 2013.