Christmas Day is not a holiday in Japan.  Even though I have been here for 7 years it still feels odd not having a traditional Christmas with traditional food.  I have been able to buy a turkey and ham and we are going to cook those for our friends at the weekend.  We would have done this sooner but Marty is working all week.

Yesterday, I went Marty’s work to meet him for lunch.  We didn’t try to find anything Western to eat and went out for my favourite sushi.  It’s an odd looking Christmas lunch but it tasted amazing. 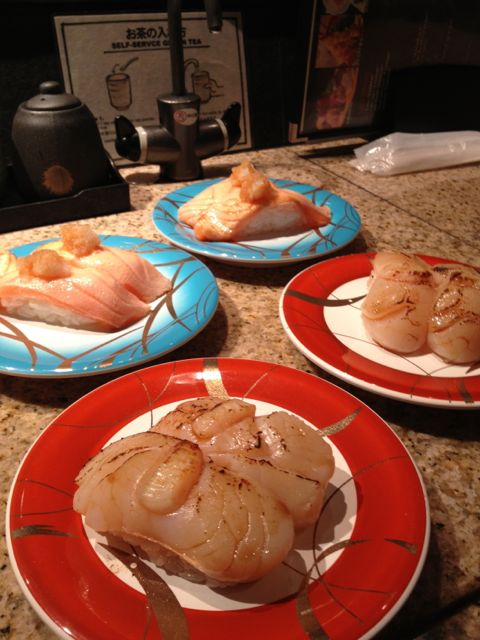 I never expected thyroid hormones to have such an impact on my daily life.  Silly really, since I studied hormones at university, but reading about them and experiencing them are quite different.  Now that it’s much colder I have become hypothyroid again.  This is to be expected but I do wish I lived in a country that adjusted medication for the winter.  At my last health check the doctor was surprised stating as always that I shouldn’t be like this on medication.  But, anyway, it happens every winter even though my Japanese doctors act as if their will alone should stop such things.

I’m aware of them today as I’ve made a mistake and taken too much medication.   I usually avoid doing this through routine.  I take my medication as soon as I go into the living room in the morning.  This morning it was really cold and I dashed out of bed to grab my laptop and went back to bed again.  An hour later, when I went back into my living room, I took my medication.  Given that I’m now incredibly warm it seems I forgot that I taken it when I got my laptop.  There is no heating on in the apartment, it’s about 7 C (44F) outside, and I’m as warm as I feel on a summer’s day.  Having an overactive thyroid must be great for the heating bills, but probably not so good for the extra food you would have to eat to burn this hot.

Short term memory problems are a issue when hypothyroid and really I should have a better system for taking tablets.  I also like to think I can change things through my will alone so I have been ignoring my short term memory issues.  Even I noticed that I spent quite a bit of time yesterday walking around the living room in circles.  I mentioned it to Marty and he tells me I’ve been like this for a while.  But it amuses him to see me behave like a caged polar bear, so he didn’t point it out.

I have been attempting to deal with the mountains of laundry and got annoyed that my hormones also cause a problem with storage space. I have too many clothes.  I need to keep them in different sizes as my weight can fluctuate horribly over the course of the year but I’m not sure where I’m supposed to store them.  I’m also annoyed that I’m bigger in winter as winter clothes are bulkier and it would be nicer if these were the clothes in smaller sizes.

Hormone changes happen gradually and it can be difficult for me to see when I’m deteriorating.  I don’t want to slow down in the winter and I do a great job at ignoring the changes.  The most noticeable change is sleeping patterns.  In the summer I would sleep around 7 hours and 45 minutes if I was left to waken naturally.  Now I’m at 9 hours and 15 minutes.  It’s not so bad though, two winters ago I was sleeping more than 12 hours a day in December.

I had never managed to buy gluten-free bread in Japan.  There are shops that sell bread made with rice flour but any I have seen also contain wheat flour. Yesterday, when I was out looking for cranberries, I came across gluten-free bread.  I was stunned to see the bread and then I saw a whole shelf of gluten-free products.  The biscuits cost more than $10 a packet, so I didn’t buy them, but it was great to see that I had the option.  The bread I bought is made with rice flour and states clearly on it that it is gluten-free.  It was in the freezer in the store, and was still rather hard when I defrosted it, but it made great stuffing.

I was shopping in Nissin World Delicatessen in Higashi-azabu.  It can be expensive, but it is sometimes the only place to buy certain foreign food.  Like parsnips, which I do miss.  But I didn’t buy the ones I saw yesterday as the concept of paying up to 1,000 円 ($10, £6) for a single parsnip is outrageous.

I managed to take a blurry picture of the shelf of gluten-free products, but if anyone is interested, blurry or not, it gives you an idea of what you can buy. 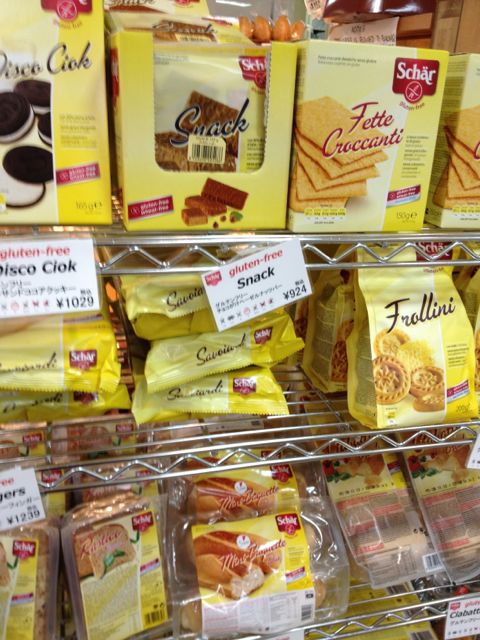 One Response to “Gluten Free Bread Found in Tokyo”

December may be my favourite month, but in recent years it has not been a good month health wise.  The change in seasons causes problems for my thyroid disease and I still struggle with pace.  I know that I need to slow down but I resent it.  It’s strange how lying on the sofa reading a novel seems like such a luxury until it’s all you have the energy to do.  I did manage to do a few things today but I’m finding it hard to concentrate.  I hope tomorrow is a better day.

It’s December and I finally get to play Christmas carols and songs.  Not that anyone stops me playing them sooner, but it’s part of my traditional build-up to Christmas to start now.  December is still my favourite month though living in Japan has changed how we celebrate Christmas. Marty will have to work on Christmas day but I will cook a turkey dinner on the Saturday after Christmas and we are going to stay with friends on Christmas Eve.

I’m going to spend part of the evening writing cards while trying not to drive Marty too mad as I sing along to carols. 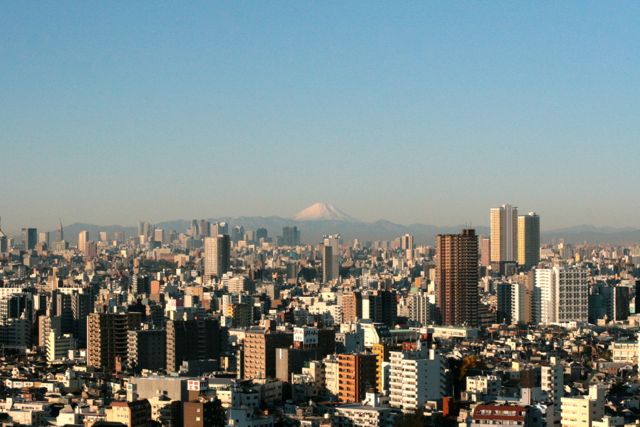