Fruit is expensive in Tokyo.  I am tormented when I enter the store by the smell of peaches but I don’t want them badly enough to pay 780 Yen ($8, £5.20) for one.  They will come down in price but by then it will be the pears that mock me with their perfection and ridiculous prices.   I always check the price of fruit before I buy it but I should remember that tomatoes are also a fruit.  Yesterday I was in a hurry and I nearly bought the wrong tomatoes.  They were 980 Yen ($10, £6.50) for a packet of five medium sized tomatoes.  I was horrified.  I assume that there is something special about them but they didn’t look particularly good.  I think I’ll be waiting a while before I make tomato soup again. 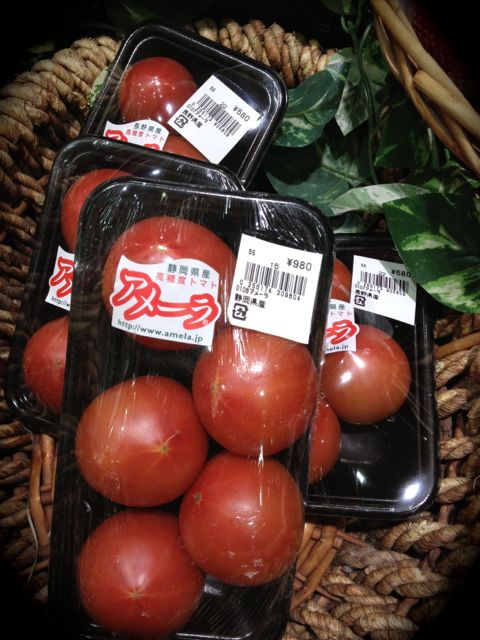 I got an email from Amazon this morning that was supposed to contain their deals of the week.  But all is said was “DUMMY”.  Not sure that will encourage me to buy anything.

I always have great plans to blog when I get home from travelling, but I find it hard to think of things to write about.  When I tell people outside Japan where I live they often ask what it is like to live somewhere so exotic.  While there is no doubt that I find lots of things about Japan strange and interesting my day to day life is not that different from the life I lived in Northern Ireland.  I cook, clean, study, and spend most of my time doing things that are anything but exotic.

The past week has been a quiet one.  I didn’t feel overly well at the weekend so we stayed at home.  I did make it to the cinema during the week to see The Great Gatsby, but I couldn’t think of anyone to go with.  So, for the first time, I went to the cinema alone.  There seems to be some sort of stigma about doing this and I’m not really sure why.  After all, it’s not like you talk to your friends during a movie.  The only odd thing that happened was realising that there is a 3D version of this movie.  What is the fascination with 3D movies?  I don’t like them.  They cause strain on my eyes and I don’t need things to jump out of the screen at me.  Thankfully I got to see the 2D version.

In other exciting household news I found a new recipe for using up spare egg whites.  The coconut and chocolate macaroons were very good and I will certainly make them again.  They were also very easy to make gluten-free by substituting the small amount of flour used in the recipe with rice flour.

On the study front I completely failed at reviewing my Japanese but I did sign up for Heroku and wrote my first node.js program.

Every day it gets a little hotter.  I have all my doors open but there is no breeze and it’s becoming unbearably sticky inside the apartment. The city is dull, grey, and waiting on rain.  Summer would be so much nicer if the sky was blue, but it’s going to be overcast for months.

I was given an early birthday present from one of my Japanese friends.  At first I wasn’t sure what it was and I thought it was a set of chopstick holders.  But it’s an ornament to display somewhere.  She bought it so that I could look at it and feel cooler during the hot days of summer.  The penguins certainly make me smile. 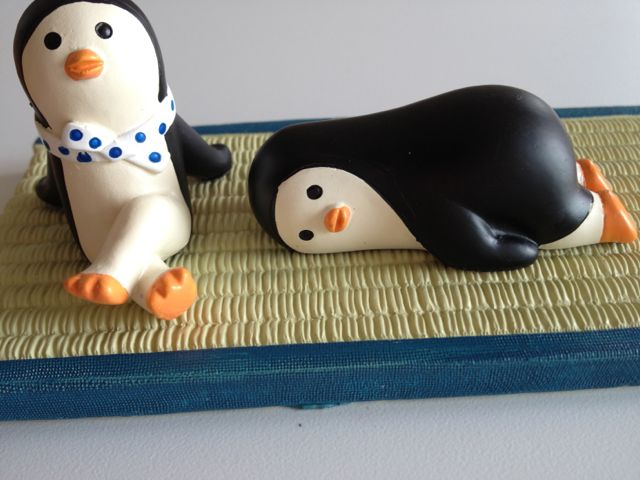 It’s been raining for the past few days.  It’s the sort of rain that reminds me of Ireland, a light rain that’s on and off for most of the day.  Soon the rainy season will begin and that won’t be so pleasant as the rain will be torrential.  I have been meaning to get back into my exercise routine but I don’t feel like going back to the gym just yet.  Since the weather is pleasant I decided to walk in the rain instead.  I live beside a river with an excellent walking route that I’ve walked many times.  But yesterday for the first time I saw a crab.

I was walking close to the water when something skittered across the path.  I was alarmed, as I thought it was a giant insect, but then I realised it was a crab. I have seen crabs before in other places, but not that often.  I tried to get closer to the crab, but I think I scared it more than it scared me, and it ran away into the long grass.  When I got closer to the grass I realised that it was crawling with crabs.  There were hundreds of them all frantically moving around.  I tried to take pictures but they really do move quickly.

At first I was fascinated but then they began to look more like insects with very sharp claws.  The more I looked at them the more I thought of horror stories (I shouldn’t be allowed to read Stephen King and Dean Koontz).  They looked creepy with their strange eyes on stalks and the thought of them getting close to me was making me feel odd so I continued with my walk and moved a bit further away from the river bank.

I told Marty about them, so maybe I’ll be brave and go back at the weekend so that he can see the crabs and protect me – from the madness in my head. 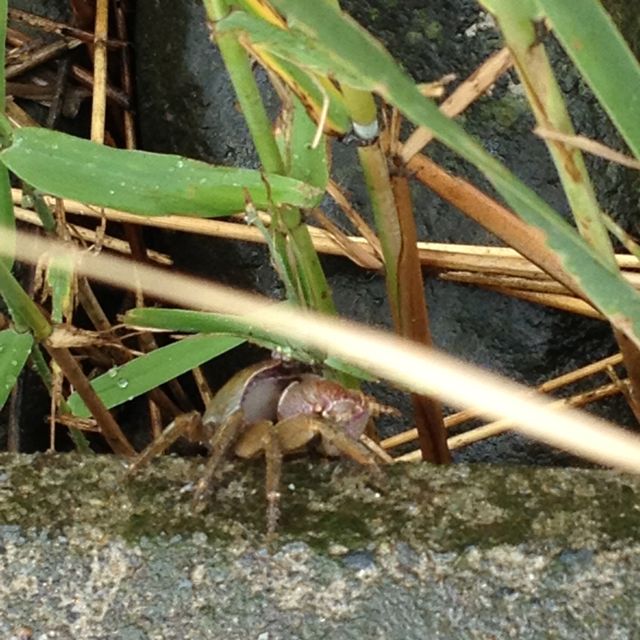 With all the travelling I have been doing over the past few months I took a break from studying Japanese.  I don’t go back to school until the 8th July but I need to start preparing now or the class will be incredibly difficult.  This morning I was looking at practice books filled with kanji.  I wrote the kanji but I am having difficultly remembering what it means.  With other subjects I just need to quickly read over the information and it comes back to me, but not Japanese.  I know that I need to practice everyday but I find it hard to be that disciplined.

Since moving to Tokyo I have bought a number of children’s books.  Every now and again I get them out of the cupboard and try to read them.  It’s an incredibly frustrating exercise when I can’t manage to read a book written for a five year old.  One of the problems is that they are written completely in hiragana.  It’s both a good and bad thing.  Good because it does mean I can read the whole book aloud, bad in that I can spend quite a while staring at a simple word like “moon” because I am so used to seeing it written in kanji.  I’m also not expecting the equivalent of “Mr Moon” but I do need to remember that these are books written for small children.

This morning I decided to read “The Very Hungry Caterpillar”.  I loved this book as a child and the Japanese translation looks just like the original.  I wasn’t that hopeful when I opened the book but I could actually read and understand it.  I didn’t know the word for lollipop and was amused that it translates as “licking candy”.  I also didn’t know the word for butterfly but it was fairly easy to work that out from context.  I’m incredibly pleased.  And yes I know it’s a book written for small children but I need to get excited with every achievement in language learning as it’s easy to be overwhelmed with everything that I can’t do.  I can still remember my joy at learning to read books in English and the hours I spent in the library trying to find more books I could read. This morning I want to to find more books that I can read in Japanese.  Long may this feeling continue!

I travelled to America for a couple of weeks and had a great time catching up with friends.   Yesterday I spent around 14 and half hours on a plane so that I could get back home.  Compared to some people I travel a lot but my body never seems to get any better at this.  This morning I am achy all over and my head is congested.  I feel like I’ve caught some sort of flu that makes your body swell.  The puffiness seems to fascinate Marty and he was wondering if it was dangerous and if I would eventually explode.  A cheery thought for my next trip.