Chicago O’Hare is not one of my favourite airports.  Last year I ended up stuck here for over a day because of a cancelled flight.  But so far this morning things have gone to plan.  I got through immigration and customs really quickly.   Transferring to another terminal took a bit longer, because of the security queues, but it went smoothly enough.

At the minute I’m sitting in United’s business lounge.  It’s not particularly impressive but at least I’ve managed to find somewhere to sit and use my computer.

I was surprised by how unfriendly the staff are who check your boarding card as you enter the lounge.  Whilst I was waiting to get in a Japanese man approached the desk and asked about problems with his wifi.  No-one could help him and the response he got was “look, I just don’t know”.  And then they turned away from him and left him standing looking confused with his computer. I know that the staff may not be able to help with what they think are technical questions but they could have at least said that they were sorry.  Instead they looked really put out that he had asked them a question.

Unlike other lounges I have been in you are expected to pay for most of the food and drink.  It’s seems that you also have to pay for wifi if you are travelling with a Star Alliance carrier other than United.  I am flying with United but nobody offered me either drink vouchers or wifi.  I had to ask for the wifi voucher when I heard the other members of staff offer this to people they were checking in.  I miss the friendly ANA staff who treated me so well at Narita airport.

2 Responses to “Back in Chicago O’Hare”

I have been living beside the Sumida River for over a year but last week was the first time I had the opportunity to travel on it.  I took a boat trip from Odaiba to Asakusa with a couple of friends.  At times travelling across Tokyo can be stressful, as the trains are so full, but the boat trip was relaxing.  There are a couple of different boats and I was disappointed that we just missed the strange silver futuristic looking one.  But that just means that I’ll have to try this again the next time we have visitors.

As well as a boat trip we also took the driverless train across the Rainbow Bridge.  There are some touristy things that I would be happy to never do again but I still enjoy going across the bridge by train. 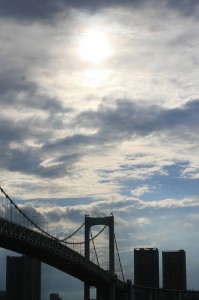