There once was a Braga Perl man

In Frankfurt he thought of a plan

Because he was missing

He tried to run off with the fan! 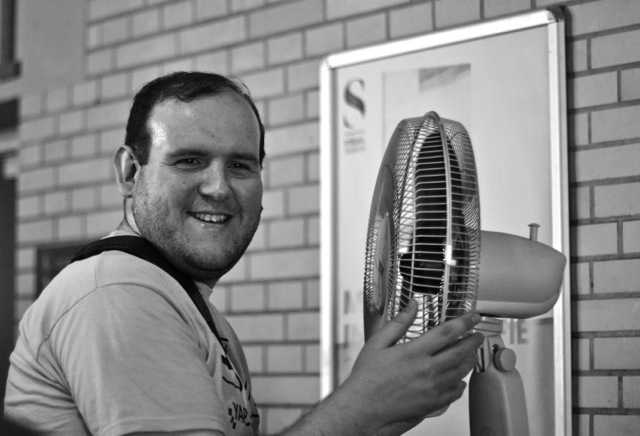 I leave Frankfurt this morning and I will be happy to say goodbye.  I did not see much of the city but what I did see was not special.  The service in the restaurants and bars was so bad that when I had to eat by myself I just bought something in a supermarket.  I usually don’t mind eating out on my own but then I usually don’t have to wait more than an hour to be served food.

I was attending a conference and the venue was not great.  It was unbearably hot.  There was no air conditioning, very few windows that opened, and it was about 36 C outside.   The first day was the hottest and it is very hard to listen to talks or to even speak to people when all you can think about is the heat and how you need to cool down.

Last impressions also count.  It was difficult to check out of the hotel and the taxi ride to the airport made me fear for me life.  When the driver arrived he complained at length about the construction as if it was somehow my fault that there were roadworks.  I can handle grumpy but I could do without road rage.  He got so angry on the way to the airport that he banged his fists off the dashboard, beeped his horn, and started to chase the car that had overtaken him incorrectly.  He nearly crashed on a bend on the way into the airport because he kept impatiently changing lanes and accelerating wildly.

I hope it’s a while before I need to come back to this city.

Thanks to the wonder that is Akismet I get to see very few spam comments on my blog.  For the past while the comments I have seen have stated how brilliant and insightful my blog is.  Today they were all about how terrible it is.  I love this progression.  I’m not ever going to believe the “best article I have ever read” comments, but comments about how I make no sense seem much more plausible.

Physiotherapy is hard work.  I spent an hour on Wednesday trying to get my body to do things it’s not built to do.  It’s easy to get embarrassed when I can’t even work out how to sit down correctly, but my therapist is kind and has a sense of humour.  I think I’m finding it easier because I learnt to ice skate as an adult.  I took lessons with tiny children who glided over the ice while I was a unsteady mass of fear attempting to cling to the ice by clenching my toes inside my boots.  I overcame my fear and awkwardness and I learnt how to skate.  I also learnt that it’s OK to look stupid and to fall on your ass.

I don’t like to look stupid, but I’m getting better at it as I get older.  Just as well really as so many of my new exercises involve attempting to stick my bottom out.  It really does not want to do that.  I find it hard to even understand that.  Instead my waist bends, or my shoulders bend forward, but my bottom refuses to obey.  And when it does obey it hurts!  I have all these underdeveloped muscles that don’t want to be used.  Thankfully my body can do some things.  I am able to stand on one foot with my eyes closed for more than 15 seconds. I did not know that this was a thing that people should do but now I am working on improving my balance.

The thing that I really like about physiotherapy is that you can measure progress.  I think that I am feeling less pain in my legs than less week, but I know that I can bend my knees a whole extra centimeter.