I think this is the first time there has been a tsunami warning for Tokyo since I moved to Japan.  Every Japanese T.V. channel is showing some sort of warning.  Some stations have subtle little wave images at the top of the screen and others, like NHK, have the screen dominated by a flashing map of the country highlighting the problematic areas.

The advisories state that they are expecting a wave of up to 2 metres to hit Tokyo bay and that people should evacuate the seashore.  We are going to stay at home today and we don’t expect the tsunami to cause us any problems.  We will, however, still pay attention to the advisories in case anything changes.

I’m not really a breakfast person.  I have been trying to change this, as I keep getting told it’s the most important meal of the day, but I rarely feel hungry in the morning.  It’s not even an interesting meal to cook as it involves breakfast food like cereals and toast.  Marty, on the other hand, loves breakfast and is always trying to persuade me to eat this.

As part of Marty’s Christmas present I agreed to make him breakfast once a month.  In January I made scrambled egg and smoked salmon bagels served with freshly squeezed orange and grapefruit juice.  This morning I am going to make Irish sausages, smoked bacon, fried eggs, and toast.  I have just finished squeezing the juice.  I ordered the sausages and bacon from TheMeatGuy earlier this month as it’s not possible to buy Irish sausages locally.  There is nothing in our agreement that means I can’t just give him cereal and toast but if I’m going to have to make breakfast I may as well try to make it special.

I was trying to find a Japanese T.V. program to watch while eating lunch earlier this week.  While flicking I came across what I thought was an exercise program.  There were three woman skimpily dressed in yellow, orange, and purple sports wear doing aerobic exercise while chanting, “Are you serious about anyone” in English.  This was strange but not as strange as the next scene which showed three salary men in business suits doing the same thing.  At this stage I still thought it was some strange exercise program and they were showing people carrying out these exercises in the work place, some sort of lunch time exercise madness.

But then it moved on to two Western people sitting at a table laid out to look like a romantic dinner.  There was soft lighting and hideous outfits more suited to the 1980s than 2010.  The woman said in ridiculously slow English, “Shall we make a toast”.  And the man responded with, “Here’s to your lovely eyes”.  Well, since the program also had subtitles showing a translation of the English I finally worked out that this was a program designed to teach English.

I couldn’t decide what was more strange – the weird exercises or the phrases they were teaching.  I mean, if I was on a date and someone made a toast to “my lovely eyes”, I would either burst out laughing or try to think of a way to quickly be somewhere else.  But then watching salary men do what looked like bust improvement exercises while chanting, “You look sensational in that dress” was one of the strangest things I’ve seen on T.V.  Well, at least in the last month, I do after all live in the land of strange.

In the U.K. when you are ill you go to see general practitioner (GP). It’s the GP who decides if you need to see a specialist. But in Japan they don’t seem to have GPs. I wanted to talk to a doctor last week about multiple things, but I couldn’t do that. I had to pick one of the things and see someone about that. I went for the joint pain as it’s keeping me awake at night.  The receptionist said, “you wish to see an orthopedics specialist”? And I looked blanked while I tried to remember what orthopedics is. I did eventually remember but would not have remembered the word myself if someone hadn’t suggested it.

I saw the orthopedics doctor and was sent for blood tests and x-rays.  I am still amazed that I can have x-rays done right away and sit down five minutes later and talk to the doctor about them.  The x-rays didn’t show anything out of the ordinary and I was told that the results of my blood tests would take a week.  I went today to get the results.  They weren’t very interesting.  They show that I am sick.  But I knew that already, it’s one of the reasons I went to the doctor.  It doesn’t give any indication as to why I have joint pains, but it does at least rule out rheumatoid arthritis.

As well as not being able to see a GP I also can’t get re-fill prescriptions.  I find this incredibly annoying.  It means that I have to go and see a dermatologist once a month if I want to have feet that don’t bleed.  I tried to see the dermatologist today but, unfortunately, they don’t work on the same day as orthopedics.  It would be easier if they were closer, the surgery is about an hour away, but it’s my limited Japanese that means I have to travel so far.

I’m not overly happy.  I left the doctors today feeling sick, with blood tests to back that up, but with no actual cure.  I need to go back and see someone in internal medicine.  I also need to see a dermatologist.  But first, I need to go the thyroid hospital, as I’m due another set of blood tests.  This is not going to be a fun week.

It’s been a strange experience using the Internet while watching the Olympic Games. I’m used to watching events by myself and was really shocked at the live Twitter and Facebook feeds. I am a figure skating fan and I would love Takahashi Daisuke of Japan win the gold medal. I’ve been yelling and clapping at the T.V. but I do this for other skaters too. I want to see them all perform perfectly. I don’t want anyone to fall or mess up and it’s amazing when a skater manages a new personal best.

But the live streams are full of comments about people being rubbish, how they want people to fail, and how country x should just go home. It’s really horrible. There are no rubbish athletes at the Olympics and while I can understand national pride the hatred towards Asians and Russia is shocking. I have tried to limit how much of this I read but the main Olympic web-site has a live feed of Facebook right beside the live stats feed. I was aware that the Internet was full of idiots but usually I do a better job of shielding myself from them.

In Japan Valentine’s Day is a day when women buy gifts for men. For the past few years we have ignored this tradition and bought gifts for each other but  this year we decided not to bother with gifts or cards. Instead, we stayed at home and cooked together, though Marty did buy me a piece of my favourite chocolate cake. 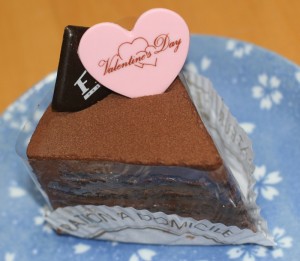 I’ve had enough of the business lounge.  Obviously I’m some sort of novelty as people keep staring at me.  I’m tired from hours of travel and it’s making me uncomfortable.  And the final straw?  I got up to walk to the ladies room and a man actually stopped mid-eating to stare.  He looked at me, with his mouth wide open, and the bread roll that he had been eating forgotten in his hand.  He just leered with food in his mouth!

Who knew that a YAPC::Asia T-shirt would cause such a stir?

It’s just turned 5am and I’m sitting by myself in the Asiana Business Lounge at Incheon Airport.  I’ve lost all sense of time so I find myself glancing at the clock every 5 minutes, which will be a dull way to pass the 5 hours between flights.

The flight from New York took nearly 15 hours.  It was mostly uneventful.  A couple of hours before landing there was announcement asking if there was a doctor on-board.  The passenger two seats away from me had taken ill.  I had noticed her during the night but merely to wonder why she had been given a quilt as well as a blanket.

We had two medical professionals on the plane who fussed around and asked questions in English and Korean.  I was impressed by the level of care given by the air stewards.  The lady was too ill to get to a bathroom and the air stewards not only held the sick bags but rubbed her back whilst she was sick.  They also pressed cold towels against her head and held her hand.  They were kind and I’m not convinced that this level of kindness would be displayed by every airline I travel with.

I worry sometimes about travelling through unknown airports but transferring through this airport is quite easy.  They claim to have the best transfer system in the world and an airport that has rest areas, play areas, museums, restaurants, shops, and massage rooms.  The transfer wasn’t difficult just a bit annoying.  The people in front of me were carrying four pieces of hand-luggage each and it got a bit chaotic when they tried to get all this x-rayed.  But it only required patience on my part.

Now I just need to find a way to stay awake.

One Response to “Airport Waiting”

I’m not back in Tokyo yet but I have already started to arrange my summer travel.  It needs to be done, because I want to travel using airline miles, but at this point I feel like I never want to travel again.  I’m out of luck though since at the minute I’m sitting at the airport waiting to board a 15 hour flight.

Registration has opened for YAPC::NA and I do plan to attend.  I have also been trying to work YAPC::EU into my travel plans.  That’s proving a lot harder as I have visitors this summer.  I’m trying to decide if it will be worth attending even if I only make the last day.  I really do want an opportunity to meet up with the European Perl Mongers.

I’ve just looked out the window and there are two people using cross-country skies to make their way up the street.  Apparently there is 2 and a half feet of snow outside.  I say “apparently” as there is no way I’m going out there to find out.

The worry though is that I do need to go out tomorrow morning.  I have a flight to catch to New York and I’m hoping that the weather improves so that the airport can open again.  I really don’t want to miss my flight home on Monday as it will be such hassle finding another flight.

When I first arranged this trip I had planned to go to the Perl conference that is on at the minute in Minneapolis.  A few weeks ago I changed my  mind because I was worried that the weather would be too bad… 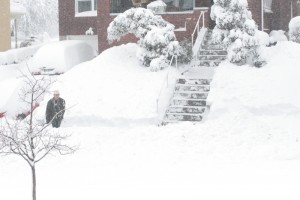 One Response to “Pittsburgh Snowpocalypse”