I knew that my Christmas Eve in Japan was going to be different but I really didn’t expect to be spending it ironing shirts for Marty. We are in the process of moving to our new apartment and we need to be completely moved by tomorrow. So instead of spending tonight wrapping presents, as I do every year, I’m going to be spending most of it packing bags. I also needed to iron shirts because Marty’s non-iron shirts came out of the dryer so wrinkled he thought that they had shrunk about two sizes. The dryer in this apartment is the most inefficient dryer I have ever come across – it takes around 3 hours to dry a shirt. The washing machine isn’t much better with the shortest wash taking over two hours! But at least I have a washer and dryer; tomorrow I won’t have anything like that. In fact the only thing in our new apartment is a bed.

Our sea freight hasn’t arrived yet and we have started to order things for our new apartment, but so far only the bed has arrived.

I will be glad to move away from Roppongi Hills. Tonight I had hoped to go to my favourite restaurant but instead we had take away pizza from Dominos. There are tens of thousands of people out on the streets as we are living in a tourist attraction and tonight there were free open air Christmas concerts. Getting back to the apartment this evening was a nightmare. I had to wait for four changes of the crossing lights before I could cross the road because of the length of the human traffic jams outside.

Anyway – it’s still Christmas and Marty did get to have his picture taken with Santa. Merry Christmas! 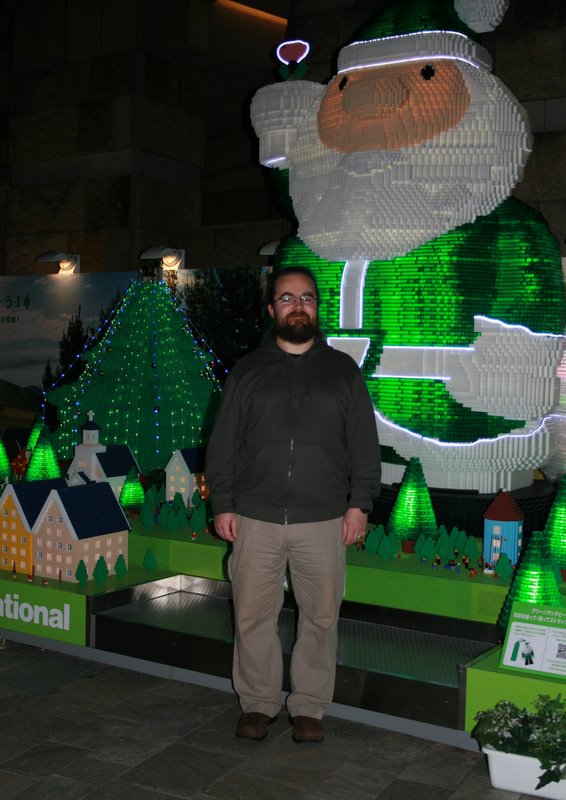 One Response to “And So This Is Christmas”

“On the way of the dark night trip, your shining nose would be very useful”

Today I sang my first Christmas song in Japanese. My teacher didn’t know that Santa’s reindeer had names and was quite surprised that we had named the one with the shining nose. She also thought that the song might have been a Japanese song that I happened to know an English translation of. But no, the song was written by the American songwriter Johnny Marks.

It’s strange being away from home when it’s so close to Christmas. Marty did point out to me that the only other time I’ve been away from home at Christmas was in 1992 when I went to Japan to visit him.

The Japanese have started to celebrate Christmas as a commercial holiday. I’ve seen some very odd things in the shops that claim to be traditional Christmas items. And strange signs that say things like “x-mas lapping set’s in store”. There’s a huge green Santa close to our apartment and I’ve seen pictures of Santa on his sleigh being pulled by what looked like a goose and a cow. I believe that Christmas is a romantic holiday in Japan and that men give gifts to women on Christmas Eve and that just like St. Valentine’s Day at home it’s not good for a woman to be by herself on Christmas Eve.

Christmas cards are really expensive – I think it’s cost me around £2.50 per card. The shops are full of imported American cards but I prefer the Japanese ones even if I can’t work out what how you display some of them. 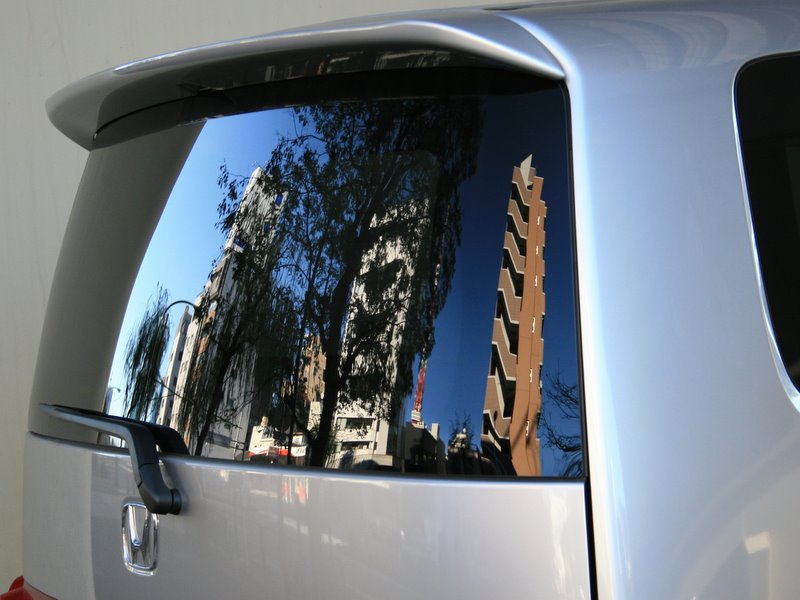 2 Responses to “Strange Place to be at Christmas”

I’m not sure which image looks more alien to me – this one or the one in my previous post. 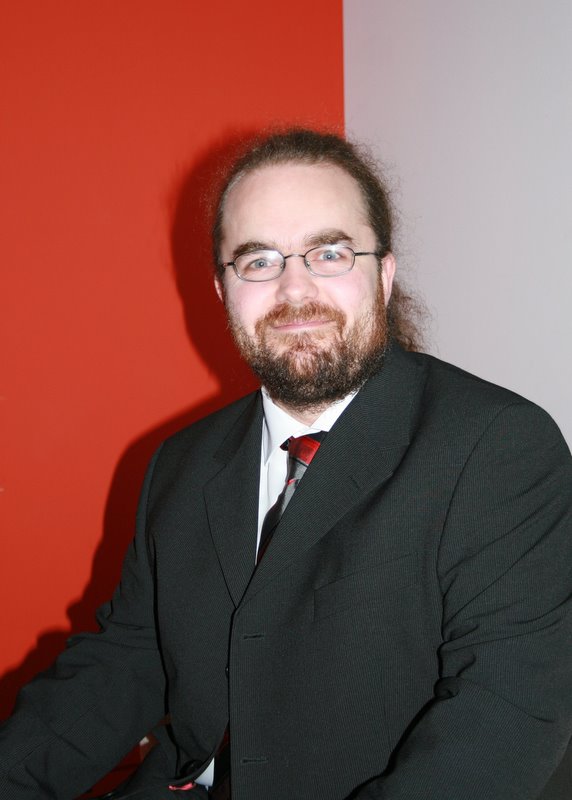 I wonder if Marty is going out of his way to look like an alien in Japan? 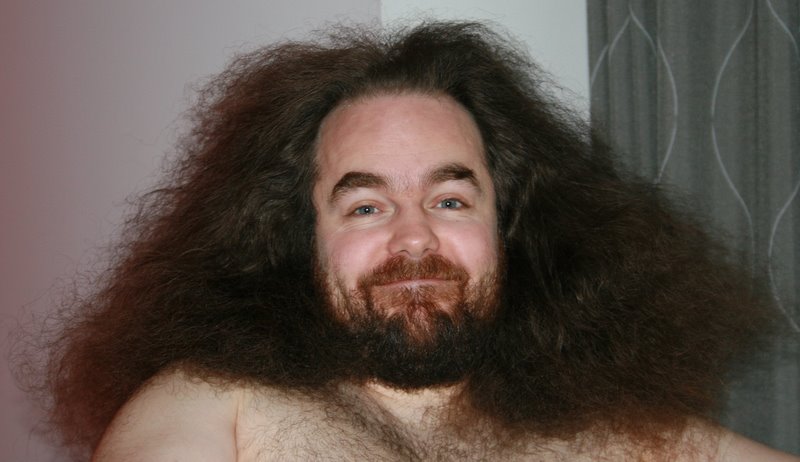 Today I felt like eating something for lunch that wasn’t Japanese. I had a bagel and cream cheese followed by a doughnut. It seemed like a safe enough choice until I bit into the doughnut. It wasn’t filled with jam as I was expecting but with azuki beans. Well I decided to try to eat it since lots of Japanese desserts use these beans. I thought that they would have been sweet but no they tasted just like cold red kidney beans. So the doughnut ended up in the bin. I think it’s going to take me quite a while to get used to some Japanese foods.

I have my first Japanese lesson tomorrow. One of the questions I was asked by the company who are providing the lessons was “What sort of teacher would you like?” This is not a question I’d ever been asked before. When I didn’t answer Ueda said “but you have studied before you must have a preference of the type of teacher you would like.”

I really don’t know what sort of teacher I would prefer. But we decided that I would like a strict teacher who was demanding and wanted me to progress. I was told that some students prefer happy teachers who don’t get too cross if the students don’t complete their work.

It made me start to think about the various teachers I have had during my life. And the one thing that I really need in a teacher is that they have the ability to teach. Did you have art teachers like I did? They handed out paper and pencils and said things like “draw a coke can”. Never did they explain how to draw a coke can or how to draw anything for that matter. They just assumed that, like them, I was born with the ability to draw objects that were placed in front of me. I hated art because I don’t find it easy to draw anything which looking back just makes me sad. They had reduced art to nothing more than being able to draw or not being able to draw.

In third year (I don’t know what they are calling these school years now but I was 13 at the time and most of my classmates were 14) my art exam was to draw a green pepper. I had three hours to draw it and what I ended up with was something that looked a bit like a potato. Recently I’ve been going through lots of old papers. In third year I came in the top 3 in my year in every subject apart from Art and PE. I don’t know what my PE result was but I was 41st in art.

My little sister is now at the stage in life were she is being asked to draw coke cans. She finds it really hard to draw and none of her teachers have explained how to draw anything. When she asked me about it I told her that I couldn’t draw one either and not to worry about it. What I didn’t tell her was that with the right teacher she could learn to draw adequately. She may never be considered a gifted artist, but like with ever other skill, there are techniques that you can learn to help you improve. Of course she like me is going to drop art as soon as she can – not realising that there is so much more to art than being able to draw something that looks like a coke can.

One Response to “What Sort of Teacher Would You Like?”