I arrived in Asheville yesterday afternoon.  I was very happy to meet some other Perl people at the airport, but they aren’t staying at the venue yet.  So, I spent the evening by myself and it looks like I’ll be alone most of today as well.

I’ve been asked to write up my first impressions, as some of the other conference attendees are interested to know things like how much my taxi from the airport cost.  It was $41 which I thought was quite expensive for what appears to be a 13 mile or so journey.  The hotel does run a shuttle-bus for $30 that you need to call and arrange and I didn’t think to do that.

My first impressions of the venue are good.  I’m staying in a Villa as I wasn’t able to get a room at the hotel for my entire stay.  It’s a bit big for me with a living room, bedroom, kitchen, and two bathrooms, but it’s quaint and I’m getting used to the space.  The hotel staff have been friendly and helpful.  When I told the bell captain that I was here alone he offered to drive me into town so that I could do some sightseeing and told me that someone from the hotel would come back and get me later.

I had dinner in the bar last night.  I was really pleased that the bartender actually spoke to me as it isn’t always easy to eat alone.  I arrived in America on Wednesday so I’ve been eating alone for a few days and last night was the first time I didn’t feel as if I was putting the restaurant out by taking up a whole table by myself.  The food was fine but there was far too much of it.  I ordered a turkey sandwich and wasn’t actually expecting it to come with a large plate of fries, as the turkey sandwich was already a bit big for me.  But then I always find the portion sizes in America to be ridiculously big.  My meal and ginger ale came to $14 (including tip) so I think I got my money’s worth even if I did eat less than half of it.

I had the continental breakfast this morning for $7.41.  I had raisin bran and fruit, but there was a wider selection than that.  I’m not sure how much the full breakfast was but given the number of people eating it I’m sure it was overly expensive either.

I was concerned that it would be overly hot but it’s beautiful this morning.  I believe that it’s going to be quite a bit hotter during the week, but I’ll be indoors for most of that. 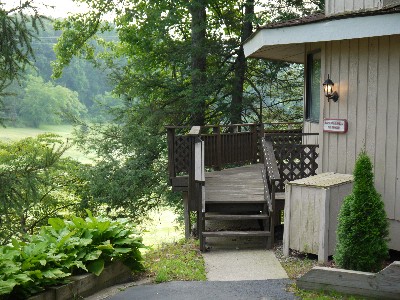 I finished knitting my Japanese bag.  The novelty wool was hard to focus on which made it difficult for me to take a decent picture.  I’m not really sure what I’m going to do with the bag, but I had fun making it. 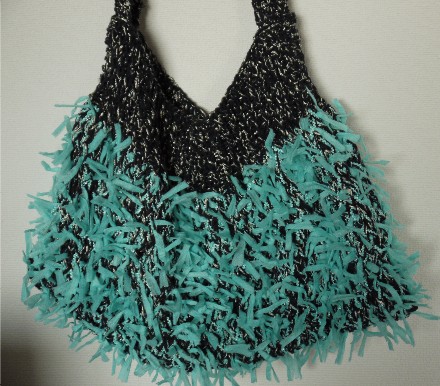 Today I got my first Japanese knitting pattern.  I was admiring a knitted bag in the local craft store and noticed that it had a couple of signs attached to it.  I had seen the first one before, it’s a sign to tell you which yarn the item was made from.  But it also had a another label that said “S-19”.  I looked at the other samples and they all had this type of label attached.  At first I thought that it was a shelf reference to make it was easy to find the yarn, but the shelves didn’t have labels.  I decided to take a closer look at the label that told you which type of yarn the sample was made from.  The bag I was looking at was made of two types of yarn using two different sizes of needles.  And then there was a sentence that I couldn’t read.  I knew some of the characters, the one for knitting, and one that is used in the word for “map”, but I couldn’t make enough sense out of it.

Marty to the rescue!  I had dragged Marty into the shop with me, since he made me look at mobile phones in another shop.  I asked him if he could read the sign.  He couldn’t, but he could type it into a dictionary.  The sentence stated that we should ask a shop assistant about the knitting pattern.  There are days when we wouldn’t have asked for help, since we didn’t really know all the right words, but we must have been feeling braver today.  I do know lots of knitting related words, the one I didn’t know was “knitting pattern”, but that was the one printed on the label.

It turns out that I can get free knitting patterns for all the samples that are in the store.  All I needed to do was ask for “S-19” when I was paying for the yarn and they would find me a copy of the bag pattern.  I’m very excited by my Japanese pattern, but it might take me a while to translate it.

My great-nephew was born in the early hours of this morning.  He was five weeks early, and weighs 5 pounds 5 ounces.  He’s doing well and my niece is doing well.  But it’s going to take me a while to get used to being called “Great Aunty K”.  Of course it will be a while before he can say anything, but we’ve already begun to use these new titles.  How could I resist calling my sister Christine “granny”?