I’m not cooking a turkey this year, but I am supposed to be making Christmas desserts.  This is not going well.  The Anzac Biscuits I have made are great but I can only bake six at a time in my little oven and Marty keeps eating them.  I made shortbread and it was a disaster.  It wasn’t the lovely light golden colour it should have been and it disintegrates with the slightest touch.

I then tried to make a fruit cake. When I started this there was no try, just do, as I have been making these for years.  Instead of being all puffed up in the middle, showing off the almond decorations, it was sad and sunken.  I was not happy but I could have rescued that with a meringue icing that is supposed to look like fluffy snow.  But then I noticed that the edges of the cake were hard, so hard that I wasn’t sure I could cut it.  I miss wheat flour and gluten.  This was the first time I had tried to bake with self raising non-gluten flour and it did not go well.  If I was staying at home I would turn it into some sort of Christmas trifle, but I have no easy way to transport that on a train.  I had wanted something that would look pretty, but I have now cut the useable parts of the cake into fruit cake slices.  They taste fine, but don’t look like the Christmas present I was hoping to make.

Since I have to take a cake to my friend’s house today I’m going to make a chocolate-chip cake with wheat flour.  It’s not exactly traditional but I have the ingredients and I no longer care that I won’t be able to eat it.  At least I’ll have something pretty to take with me.  Marty is also baking.  He’s attempting to make  a chocolate roulade, which if nothing else smells beautiful.  It has to cool for three hours and then we will get to see how it goes.  If it fails to roll I think we’ll buy some strawberries, mix in the whiskey cream, and break the meringue up in pieces.  We’ll call it Christmas mess, as that has to be better than Christmas fail.

We are not going to cook Christmas dinner this year.  Marty wasn’t able to get the day off work so we decided it would be easier to go out for a meal.  I cooked dinner the last couple of years and it was a challenge finding the ingredients I wanted.  This year we have a new one – I’m on a gluten-free diet.  There is a theory that eating gluten makes my thyroid disease worse.   I have a thyroid hormone that has not been improving with medication and it’s possible that changing my diet will help.  I’ve been gluten-free for a couple of months now and I’m certainly doing a lot better than I did this time last year.

Being gluten-free in Japan is not easy.  I never thought of wheat as an ingredient in Japanese cooking but it’s everywhere.  The main problem is that there is gluten in soy sauce.  There is even gluten in most tamari, though I have often heard it described as wheat-free soy sauce.   Eating out has become a challenge.  I can’t eat noodles, tempura, ton katsu, or yakitori. I have been avoiding my favourite French restaurant as the smell of the bread drives me mad.  I can still eat Indian food, but I really do miss pasta and pizza.

Bread is becoming very popular in Japan.  The coffee shop I study in on weekdays does not contain a single thing that I can eat.   I can bake my own things but I need to be careful about the flour I use.  Rice flour is naturally gluten-free but lots of the rice flour here has gluten added to it to make it easier to bake with. There are no gluten-free bread or pasta products in the local shops  I was told that that it is possible to buy bread made with rice flour but all the ones I have seen also contain wheat.  I have been able to find a few things online but they are expensive and since I do cook a lot of my own food I have just made other things.

I did order a couple of things from the UK and I am looking forward to trying my gluten free Christmas cake.   I also ordered a packet of gluten-free rolls, the type that you bake in the over, but they were horrible.  I was going to throw them out but I ground them up and made stuffing with them which wasn’t bad at all.  I should really try to make gluten-free shortbread for Christmas but I haven’t had the energy to do that.  It’s time consuming and I worry that I will spend ages fiddling with it only to find it tastes bad.  Maybe this year we’ll have gluten-free cupcakes instead as I know they taste good.

There is something odd that happens quite often in Japan.  A foreigner speaks one sentence in Japanese and they are immediately complimented for their skill at speaking Japanese.  This is usually said with great enthusiasm and sometimes with surprise.  It’s a hard thing to listen to because you can’t actually tell if someone is skilled at speaking a language based on one sentence.  My Japanese is also not very good so I feel strange when people tell me how skilled I am.  Today it happened after one word.

Marty was looking at a Galaxy Note at a Galaxy exhibition.  It was a largish room and we were the only people there who were not staff.  None of the staff wanted to speak to us.  The staff who were supposed to be monitoring our table were standing against the wall.  They were both trying to talk the other one into speaking to us and neither of them wanted to try speaking in English. Finally the woman approached us.  She spoke slowly and said, “konnichiwa”.  Marty responded with, “konnichiwa”.  She clapped her hands in excitement and told Marty that he was really good at speaking Japanese.  It was bizarre and we did our best not to laugh, but I assume her enthusiasm came from relief that we did not look blankly at her.  It’s good to know that Marty is skilled at saying “good day”.

Even though I have been living in Tokyo for just over six years I still see food in the supermarket that I don’t recognise.  The types of fruit you can buy change with the seasons and winter citrus season has arrived.  Today I could have bought a 4 kilo box of mikans. This may seem like an odd thing to comment on but fruit is very expensive in Japan.  The concept of buying so much of it at one time now seems like madness to me.  I did stop to admire it though and the other citrus fruits.  I have known about oranges, grapefruits, lemons, and limes, for most of my life but I did not know that so many other citrus fruits exist.

When I first moved I discovered yuzu, which tastes somewhere between a lemon and a lime and is excellent in dressings and with fish.  Last year I discovered dekopon which is a wonderful sweet orange-like fruit.  Today I saw something called a kabosu and another fruit called merogourudo.  The kabosu was small and a darkish green.  It looked like it might be bitter and since it cost about 200 円 ($2.40) I decided not to buy one.  But the merogourudo thing was fascinating.  It looked like a large mutant grapefruit.  It’s English name is Melogold Grapefruit and it’s the biggest grapefruit I have ever seen.  Reading about it online suggests it may turn out to be the sweetest one I have eaten.  It was 238 円 ($2.90) and seemed much better value than the tiny fruit.  I have not eaten it yet as I will have to wait until I feel hungry enough to tackle such a large grapefruit.

A Large Mikan and a Melogold Grapefruit

I’m not quite sure how the year manages to go by so quickly.  I’m sitting on the floor surrounded by Christmas cards and it seems like no time at all since I did this last year.  November was incredibly busy and flew by with Japanese lessons, TPF work, and  NaNoWriMo.   I was determined to complete NaNoWriMo this year and I somehow managed to write the required 50,000 words before midnight last night.

December is my favourite month as I love Christmas.  I have put up my little Christmas tree and finished about 50% of my Christmas shopping.  Christmas in Japan is always a little strange but it certainly isn’t boring.  Marty is working on Christmas Day, so we won’t be cooking at home, but we have made reservations to go out for roast turkey that night. 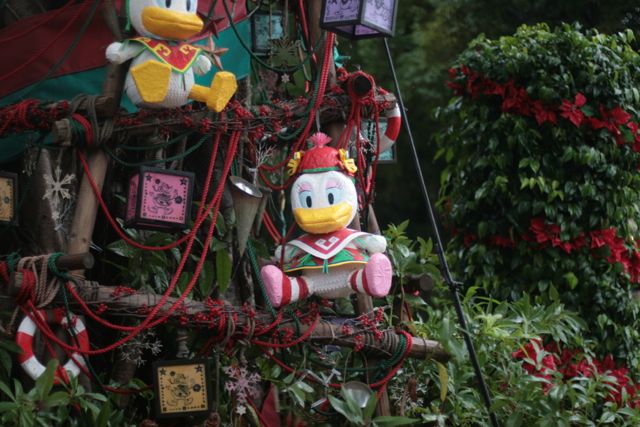