The nurse standing in front of me was Taiwanese.  She spoke little English and I speak no Chinese.  She looked at me and said, “Ah yumich?”.  I was weak, sick, and dizzy.  My confused brain couldn’t work out what she was asking.   She asked again, only much louder this time.  “AH YUMICH?”.

There was so much confusion regarding my name.  When I was admitted my passport was taken for identification. The first hospital wrist-band I was given listed my name as “British Citizen”.  Marty pointed out the mistake and a new band was made.  This one listed my name as “Karen Michelle”.  We didn’t try to get this corrected, after all it is part of my name.

By the time I was moved from the E.R. ward to the treatment ward my name had mutated again.  This time to “Karen Mich”.

3 Responses to “Are You Mich?”

I am thrilled to be back home from Taipei.  I really liked the city and enjoyed the conference but spending days in hospital was not a good way to end the trip.  Once my hands heal, they are bruised and swollen from the IVs, I’ll write more about my experiences. 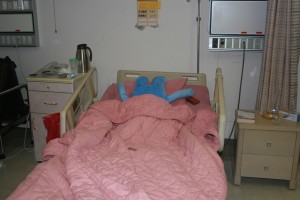 Blue Teddy in my Hospital Bed

3 Responses to “Back From Taiwan”

For the last couple of days I have been at the Open Source Developers’ Conference in Taipei, Taiwan.  This is the second technical conference I have attended this month.

I always mean to write up the interesting talks I hear but it’s actually quite hard to explain a talk in a blog post.  For example my notes from Martin Fowler’s QCon talk on Domain Specific Languages contain 1500 words and a couple of diagrams.  This is probably far too long for a blog post.

I will, however, try to write up something about each conference.  This would be easier if I had a working Internet connection.  I didn’t have a connection at QCon and whilst OSDC.tw has one it’s so slow it’s basically useless.  I have attended many conferences in the past without a computer and didn’t care that I had no Internet connection.  But here in Asia, since I understand only a little Japanese and no Chinese, there are many talks that I can’t understand.  It seems acceptable at a technical conference to use a computer during a talk but I think the speakers would find it off-putting if I read a book.

The Japan Perl Association (JPA) launched today.  This is the latest organization created to promote and support the use of the Perl programming language.

There is no doubt that there is a thriving Perl community in Japan.  YAPC::Asia has been held in Tokyo for the past few years and it has become the largest Perl conference in the world.  It’s actually difficult to get a ticket to attend as it usually sells out in under two weeks.  I believe that the success of this conference is one of the driving factors behind creating JPA.

The local Perl Mongers groups are also very popular.  When Shibuya.pm holds a technical meeting they expect to have more than 100 attendees.  This contrasts with the technical meeting I attended in Sydney that had 10 people.

There are other organizations that promote Perl, The Perl Foundation (TPF), YAPC Europe Foundation (YEF), Enlighted Perl Organisation (EPO), to name a few.  Since I am involved with TPF and YEF I will be interested in seeing how JPA  progresses and what it does differently than the other organisations.

According to Nob Seki’s twitter stream from the press conference the main activities of the organization will be:

I’m not sure exactly what some of that will entail but their first educational event will take place on the 21st April.  This will feature Jay Shirley who will be speaking on Better Perl Practices (giving advice on the latest development methods) and Catalyst Guts.

One Response to “Japan Perl Association”

I went out today looking for the cherry blossom trees I could see from the  balcony.  I didn’t manage to find them all.  I have no sense of direction and managed to get lost even though I was trying to follow the river. 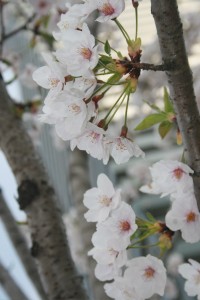 The wind has been picking up and I was worried that all the flowers would have blown away.  There are still trees in flower and I got to stand under them and watch the blossoms fall like snow. 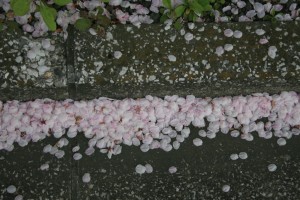 Last Wednesday I spoke at a Sydney.pm meeting.  This was the first time I have ever been to a Perl Mongers meeting on my own where I didn’t know anyone.  If I hadn’t been speaking I wonder if I would have managed to do this?

I found it surprisingly difficult to go into a bar by myself to look for a group of men I didn’t know.  I arrived on time but I couldn’t see any other people in the bar who looked like Perl Mongers.  So I sat in the downstairs bar and waited.  I did recognise the Perl Mongers when they arrived, they were talking quite loudly about Perl and CPAN, but it took me a while to go over and introduce myself.

It made me wonder if casually meeting up in a bar to take people to an unknown venue is the best thing.  I would have found it much easier to meet at a venue that was specific for the event.  Belfast.pm held a few talks at the Customer Events room in the BT Tower.  When you turned up there you knew it was for the meeting and that the people in the room were there for the same reason as you.  A bar can be a big place – this one had two floors – and for someone like me who never goes to bars on her own it felt awkward.

I realise that sometimes Perl Mongers groups have little choice on where to meet.  If it has to be a public place, like a bar, here as some things I think you could do to help newcomers:

1. Arrange to have a least one regular member there on time.

I arrived on time.  Timekeeping is a cultural thing.  I live in Japan where everyone arrives on time.  I had no idea what was normal in Sydney so I arrived at the time I was given.

Sydney.pm had a list on their wiki of people who were planning to attend.  This gave me an idea of the size of group I was trying to find.

3. Have pictures of regular members of the group on the website so that newcomers know who to look out for.

I did try to find pictures of the members of Sydney.pm in advance in the hope that I would recognise them in the bar.  The person I ended up recognising was Paul Fenwick – the other guest speaker – as I had read up on him before I attended.

4. Have something distinctive for newcomers to look out for.

The leader of Sydney.pm brought a fluffy camel.  He didn’t arrive first but if I hadn’t already spotted the group I would have noticed the guy with the camel walk through the door.

5. Be as specific as you can about where you will be meeting.

I would have felt more comfortable if I had known in advance that the bar had two floors and that we would be meeting in the downstairs bar.  It would have been even better if I had known to look out for Stephen (with a link to his picture) who would be sitting near the door with a fluffly camel.

Hard to believe that we have been married 13 years. 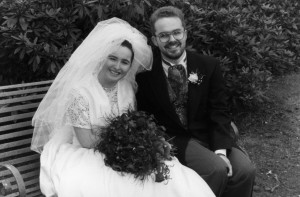 One Response to “Wedding Anniversary” 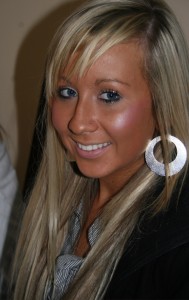