I was in Holland recently visiting my family.  My Dad has been making his garden pretty and he was very keen to show me his new plants.

“You have to take a picture of me and my wonder bum”, he said.

Well, like the mature adult I am, all I could do was giggle at the thought of a wonder bum.

I don’t know a lot of Dutch, but since I was hearing “bum” I did wonder if the word for tree was going to be something similar to the German word “baum”.  It turns out that the plant, in Dutch, is called “Wonderboom“, and “boom” is the word for tree. But please, don’t ask me to pronounce “boom”. 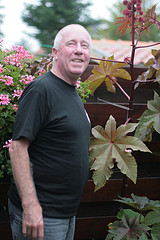 Dad and the Wonderboom

I met a couple of friends last night from Birmingham.pm, and though I may be lured out of my room this evening, I’m planning on spending today by myself.  I have not been overly well and I’ve got a large backlog of work for TPF, which I would love to make a dent in. Tomorrow I plan to attend the Perl 6 Hackathon.

It shows ingratitude and a lack of imagination to spend the life we’ve been given stamping, literally or metaphorically, on the lives of others, or sneering contemptuously at how they have chosen to make sense of theirs.  It is a harsh world, indescribably cruel.  It is an gentle world, unbelievably beautiful.  It is a world that can make us bitter, hateful, rabid, destroyers of joy.  It is a world that can draw forth tenderness from us, as we lean towards one another over broken gates.  It is a world of monsters and saints, a mutilated world, but it is the only one have been given.  We should let it shock us not into hatred or anxiety, but into unconditional love.

— Richard Holloway, Between the Monster and the Saint

One Response to “Gratitude for Being”

I was late.  My conference day started at 7am when I went looking for breakfast, though thanks to the joys of jet lag I had been awake since 4am.  It was now nearly 7pm and all I wanted to do was sleep.  But instead I was walking up a steep hill, hoping I was going in the right direction.

Even with my terrible sense of direction the event was easy to find as I could follow the sounds of animated conversation.  When I arrived it was like walking into a cocktail party full of extraverts. Everyone was chatting, drinking, and looking relaxed. There was no doubt that the event was going well.  I was impressed: this wasn’t a group of extraverts or a group of old friends, but a mixture of new attendees and Perl luminaries.

I also felt nervous as I don’t like large groups of people.  But Paul Fenwick, someone I do know, came and greeted me, and it wasn’t long before people that I hadn’t met came up and started chatting.  The conversations followed a similar pattern, the person introduced themselves, talked a bit about how they used Perl, and went on from there.  Afterwards I was told it was suggested that this would be a good way to introduce yourself to others, and it did work.  There is no doubt that it’s easier to talk to a stranger if you have a plan as to what you should talk about.

The VIP event was created to give first time attendees the opportunity to meet other conference attendees – VIP standing for “Very Important to Perl”, and referring to the new attendees.  This is the second time that Yaakov has run this event at YAPC::NA, and I believe that it has become very important to the conference.

Marty took most of the cupcakes into the office on Monday morning.  He didn’t put as much effort into decorating them as we had planned for Sunday, but he still had fun. 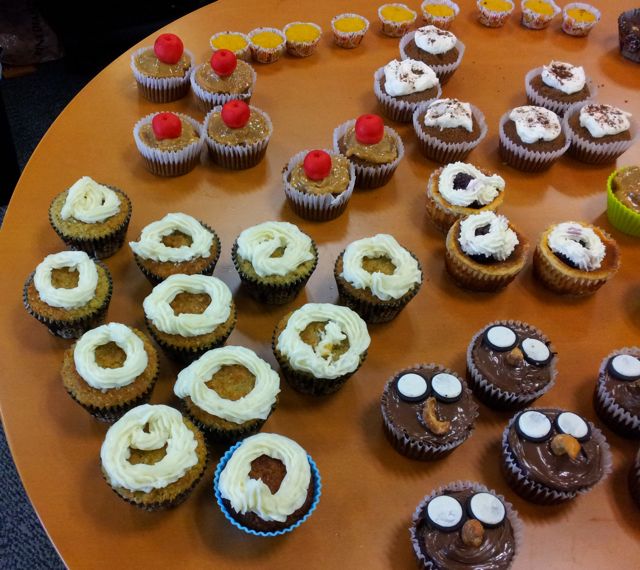 I had to cancel the cupcake party.  I didn’t want to, but I was ill on Sunday.  The forlorn cupcakes spent the day in the fridge before being taken to Marty’s office on Monday. 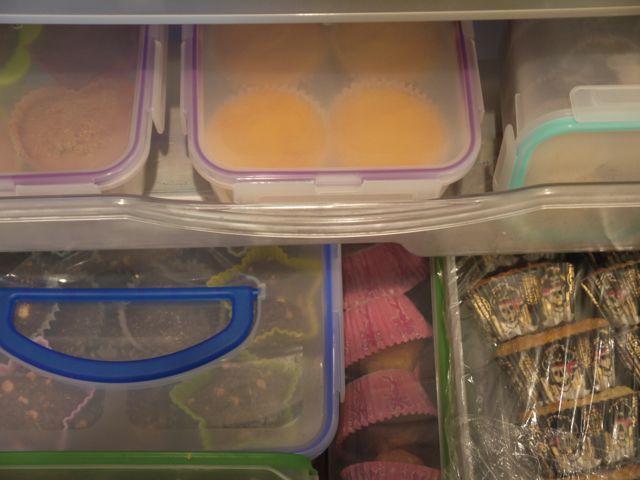