I did read a guide book before coming to Seoul but I didn’t know what I wanted to do yesterday. Marty had no strong opinion either but I gave him the guide book and asked him to decide. After a long lazy breakfast in our room we headed out for the day.  The first stop was Samsung D’Light.  Marty started raving about new phones and tablets, and well, what was I expecting when I handed him the guidebook?

I’m not overly excited by Samsung products, but it wasn’t a bad a way to spend an hour or so.  I spent much of my time there playing Angry Birds on a variety of devices but I did look at some other things.  There was a large LED display that looked really impressive.  It played music when you touched the glass and Marty had a lot of fun moving around quickly making a lot of racket  I was more excited by the interesting photographs that could be taken but I didn’t think it would be appropriate to spend too long taking pictures. 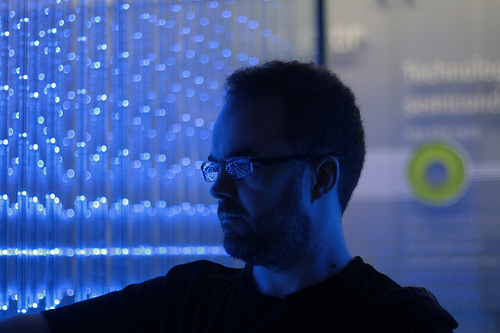 Marty at the LED Drum Display

There were also an exhibit that allowed you to put a picture of yourself into an old painting.  It was using LCD technology, which in itself is nothing new, but it was on the front of a display cabinet containing cameras.  Once you took the pictures you could email them or post them to twitter.  The place was mostly empty so we did spend a bit of time messing around with this. 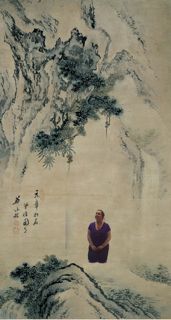 Karen, pretending to be serene

Once we left we decided to walk to the main bus station.  Things didn’t go quite as planned as I got tired walking in the sun after about an hour. Thankfully Seoul is like Tokyo with a great public transport system and we were able to hop on a train.  We had plans to go and see the Cathedral and to maybe do a bit of shopping.  I wanted to stop walking for a while so we decided to try to find the shops first.  We messed up.  When we arrived at the shops we appeared to be in a hardware store district.  I have no desire to buy a new set of ladders and at least four shops had displays of these.  We gave up on shopping and starting walking again and did find the Cathedral.  We also found the shopping area that had been recommended to Marty but then so had thousands of other people.  In the end we just walked through the streets trying not to get crushed. 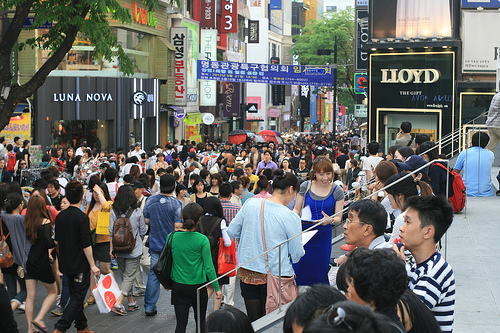 I woke up and the road with seven lanes on one side wasn’t a dream, no matter how dream-like the view from our hotel room is. 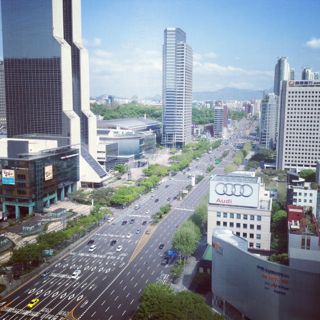 When we moved to Tokyo we had great plans to go and visit the neighbouring countries.  Great plans, but very little action.  It’s Golden Week in Japan and instead of staying at home for the holiday we decided to escape the crowds in Tokyo to go and see the crowds in Seoul.  We didn’t know anything much about the city apart from the fact that it’s very large, close to North Korea, and contains lots of spicy food. In my head Seoul was going to look something like Tokyo, but I was wrong.

We arrived at Incheon airport, which is about 40 kilometers outside the city, late last night.  We did consider getting a bus but our plane had been delayed and it seemed easier to get a taxi.  We got a bit confused as there were a number of different types of taxis but without too much hassle we were soon on our way to the city.  Our driver had quite a bit of trouble understanding where we wanted to go but we had a map in our guide book.  We should really have had the name and address of the hotel printed out in Korean, but we’ll know for next time.

It took no time at all to see the lights of the city, probably because the taxi flew along the wide empty roads.  From the back seat I could see the speedometer.  I asked Marty if he knew what unit of measurement they used for speed – miles or kilometers.  He thankfully said kilometers as the car was moving at nearly 150 of these.  When we got to the city we slowed down to about 90. Our driver wasn’t overly concerned about speed limits as the ones I glanced at the side of the road were for much lower speeds.

I could smell the river before I saw it.  I do think that we crossed it but in the dark I couldn’t see if the bridge was anything other than long.  Gazing across the river the city appeared to be full of very tall buildings.  As well as the lights of the skyscrapers I spotted at least six large Christian crosses decorated with lights.  Coming from Northern Ireland I have certainly seen crosses but those were mostly made out of wood or stone and do not glow in the dark.  They also aren’t stuck on the roofs of what must be incredibly large churches.

As we got closer to the hotel I stopped gazing into the distance and focused on the roads as now there was a lot of traffic.  In Tokyo they have built roads in the air but here there are wide roads on the ground.  I counted seven lanes on our side of the road, four for going forward and three for turning.  I tried to count the lanes on the other side of the road but there were too many cars and I was having difficulty believing that there could be seven lanes on any side of a road. 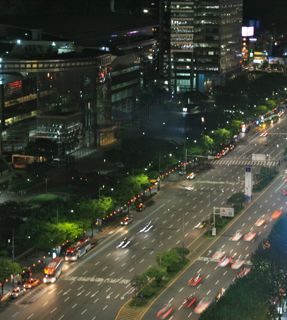