As I watched the chocolate cupcake mix fly across the room I couldn’t help but think that maybe today wasn’t the day to be having people over for dinner.  The antibiotics and painkillers I was taking weren’t exactly making me feel good.  The pain of the infected impacted wisdom tooth was keeping me awake at night and I was a bit out of it.  What I should have been thinking was, “turn off the electronic whisk!”.  Seriously.  There were little flecks of chocolate all across the room, the room that I had only finished cleaning about an hour ago.

Winter seems to be at time for me to stagger from one infection to the next.  I hope that things improve in the spring.

The hotel we stayed in during our Osaka trip had a spa on the same floor as the restaurant.  I ended up reading about their services on our first morning when Marty was sent back to the room to change his footwear.  (He was wearing the slippers the hotel provided, which is a fairly common thing to do at a Japanese hotel, but wasn’t allowed at this one.)  The sign describing the spa services was written in both Japanese and English.  I stopped reading when I came to “Head or Horn care”. 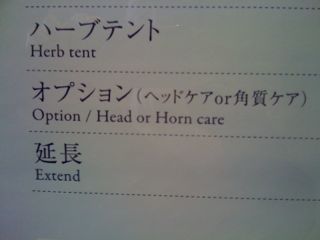 I couldn’t read the kanji so I had no idea what they had decided to translate as “horn”.  When Marty got back he looked it up in his dictionary and came up with “scaly horn”, which wasn’t much better.  After we got over our childish amusement we decided that the correct translation was probably “keratin”.

When I looked out the window last night I saw a city covered in white.  There is something about snow that makes me think of being a child, something nostalgic that makes it magical.  I decided that if the snow was lying today I would go for a walk and take pictures of the local area.  In my head it sounded almost romantic. I could take pictures of the local shrine, the river, of the flowering hedges, and the bare branches of the cherry blossoms draped in snow.  The reality was somewhat different.

I set an alarm to get up at sunrise, which highlights the fact that I wasn’t thinking straight.  This morning I ignored the alarm and two hours later wandered on to the balcony and took a few pictures of the view. 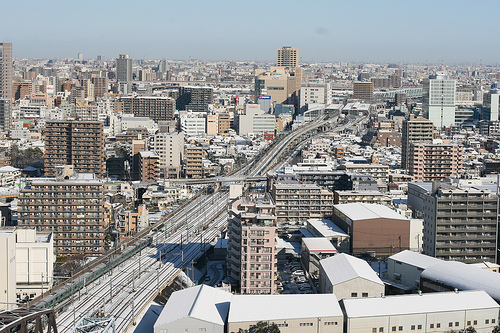 It did look beautiful and once I was dressed in many layers of clothes I ventured outside.  I wasn’t even a block away from the apartment when Marty’s strange comment about snowboarding started to make sense.  He had rang from the train station, when I was still half asleep, and said something about being glad that he’d been snowboarding all weekend.  Once I tried walking on the ice I realised that he was talking about balance.  I had forgotten how hard it is to walk on half-frozen snow.  Instead of enjoying the view I spent my time concentrating on my feet.  Instead of walking without thinking every step became deliberate.  I like to walk briskly and was not pleased to realise that it was moving at least three times slower than my usual walking pace.

Then there were the roads.  I wasn’t that far from the apartment when I saw a snowman.  I’ve never seen one in Tokyo and I wanted to take a picture, but that meant crossing the road.  Since there was a zebra crossing conveniently placed beside the snowman this should have been really easy.  But the roads hadn’t been gritted and I noticed the snowman because I had been watching two men attempt to push a van that was stuck in the ice.  The zebra crossing was covered in a sheet of thick ice.  So I stood and waited until the road was clear because I had no idea how long it would take me to cross it and I wasn’t keen to find out if the cars could actually stop at it. 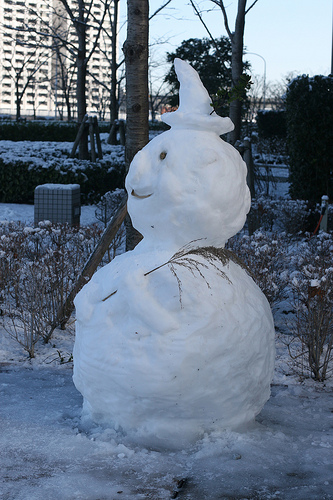 I soon discovered that it was better to walk on the shaded side of the street, as it’s easier to walk on snow rather than ice, and that I should avoid areas that had been cleared.  There were people outside many of the buildings attempting to clear up the snow. What they were actually doing was creating icy death-traps that looked safe to walk on as it was hard to see the thin layers of ice.

I did manage to get to the river and at that point walking became easier.  There were lots of young children out playing and I did get to see the frozen flowers and the trees.   But I didn’t find the shrine.  I have been there before, but I just couldn’t remember which part of the river it was close to.  I usually cycle in that area, not walk, and everything look really different covered in snow.  I really wanted to take pictures of the shrine but my legs were starting to hurt from all the deliberate walking, and I was a bit lost.  I then remembered Marty telling me last night that there was no way I would remember where the shrine was and that I should look it up before I left the house. 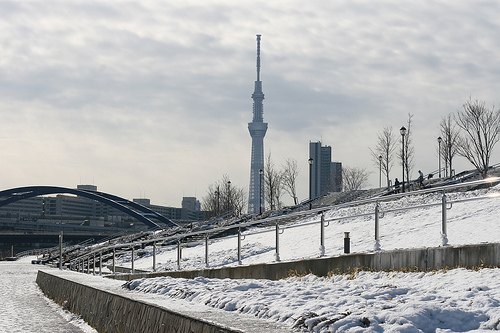 As I was just about to leave the Shiori Park area I was able to find a map.  (Even writing that makes me feel stupid, after all I had my iPhone in my bag, have an unlimited data plan, and access to lots of maps…)  The shrine was about 2 kilometers back the way I had just walked, if I went back along the river.  I have a fondness for walking along the river as it’s hard to get lost doing that.  It’s in no way the shortest route, as it curves, but usually the extra walking doesn’t bother me.  Today I decided to try a new route through the streets, aching legs will do that, and I did manage to find the shrine.  When I got there it was no longer as pretty as I had imagined as the snow was melting. But I took pictures anyway and then slowly made my way home.

By the time I got back home both my legs were aching at the top.  I think I must have been waddling, a bit like an un-cute penguin.  Maybe the next time I feel like going for a walk in the snow I’ll remember some of this and stay inside. 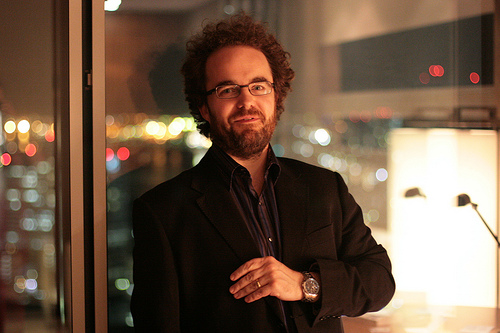 He didn’t want me to make his birthday into a big event so we went away together for a few days and finished our trip with a great meal at Gordon Ramsey’s restaurant in Tokyo. 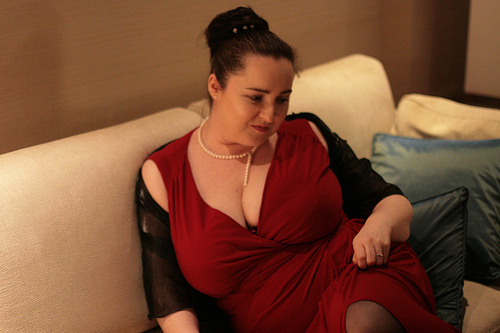 One Response to “Birthday!”

It was cold and dark at the train station in Osaka and I didn’t want to get lost on the way to Universal.  Mind you, the train that arrived after I asked the question, “are you sure this is the right platform”, certainly removed doubt. 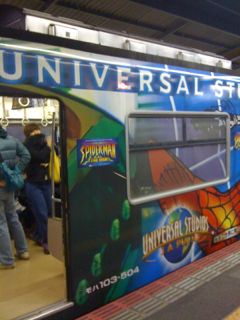 We are going to Osaka this evening. It’s been nearly 10 years since we were there.  It’s also been nearly 10 years since I started this blog and I was pleased to see posts about my previous trip.  I don’t remember liking Osaka much, but I think that part of that was the dodgy hotel we stayed in.  This time was are going to stay near Universal Studios and I’ve been researching food as some do claim that Osaka is the greatest food city in the world.

I’m excited about the journey as we will be travelling on the N700.  I realise that makes me sound like a train spotter but really the train is amazing. It has a top speed of 300 km/h (186 mph), though I’m not sure that it reaches that speed on this journey.  But it does mean that the 500 or so kilometer trip can be done in less than 2 and half hours.

I’ll try to blog about our adventures but I may end up being offline for around a week.

Perl Oasis takes place in Orlando this weekend.  I had hoped to attend but I decided in November that I probably wasn’t well enough to attempt the journey.  I have been once before and I really enjoyed the workshop.  Actually, I’ve enjoyed all of the Perl workshops that I have attended.  They tend to be smaller than the YAPC conferences and while I am happy that more people are attending YAPCs I’m not fond of crowds.

At the minute it looks like the first conference I’ll attend this year with be YAPC::NA in Madison.  Looking at my travel schedule I should have been able to make the German Perl Workshop in March but I only noticed the dates of that workshop yesterday.  It’s too late for me to change my plans but it’s a bit annoying that I will arrive in Europe on the day the workshop ends.  I am flying to Ireland but I could easily have stopped over in Germany.

I read so many things about Perl every week but I haven’t found a good way to know when Perl events are taking place.  The other summer conference I’m hoping to attend is  YAPC::EU but there are no dates for this conference yet.  I hope they are available soon as my other commitments are beginning to need attention and may eat up my summer.

I called into the bank yesterday to get my cash card replaced as it was damaged by a magnet somewhere on my travels.  As I was leaving the bank I was given a good luck charm.  I’m not quite sure what I’m supposed to do with it.  I know that sometimes charms are burned at the end of the year, but since this one contains a coin, I don’t think that will work overly well. 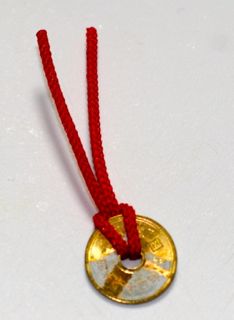 I have been asked a few times in the past couple of months about money and my role in The Perl Foundation (TPF).  I’m not fond of discussing money so I’ll make this brief.  I am not an employee of  TPF, I am a volunteer.  I don’t receive any money for my work with TPF nor does TPF pay my expenses for travelling or attending conferences.  This is true for all TPF volunteers.  The only people who do receive money are grant recipients and those who are paid for professional services like accountants and lawyers.

I am very fortunate that I am able to volunteer and get to work with a great community filled with volunteers.

One Response to “Volunteer”