I took ill at the start of March and every day since I’ve  expected to feel better.  There were days in the month when things did improve, but then a day later I would wake up and feel as if someone had stabbed me in the throat again.  Yesterday I went to see the doctor as it was fairly obvious that wishful thinking the infection away wasn’t working.

I will only go and see a doctor if I feel I have no other choice.  But in Japan you are expected to go and see a doctor as soon as you suspect that you are ill, even if you think that illness may be nothing other than a cold.  The doctor was not happy that I had waited nearly 4 weeks to see someone.  I was not happy that the doctor spent his time with me typing notes on his computer and asking me questions as I was expecting him to examine me or maybe even look at me.  At the point where I was wondering why I couldn’t just have sent an email diagnosing myself he did look at my throat.  He then prescribed four different types of medication.  He didn’t tell me much about them, but then I knew that the pharmacist would do this.

When I saw the pharmacist he also wasn’t happy that I had waited for weeks, his assumption being that the symptoms had started maybe a day ago.  He told me that I was being given medication for my throat and sinus infection that included a pain killer, throat tablet, decongestant, and something for the cough.  I was given detailed verbal instructions on how to take the medication and a detailed printout.  If I had received this medication in the United Kingdom I would have been given some additional information.  The throat tablet was an antibiotic.  I wasn’t told that nor was I told that it is important to take the full course of antibiotics.  It makes me suspect that in Japan people take the medication that they are given and don’t just stop taking it when they feel better.  I also wasn’t told about possible side effects the most important one being that one of the drugs would make me drowsy.  Maybe I’m supposed to stay inside and do nothing for the next 7 days?

As always after a visit to a Japanese doctor I arrived home with what seemed like far too much medication.  But I will be good and take it for the next 7 days as I would like to be able to talk without pain. 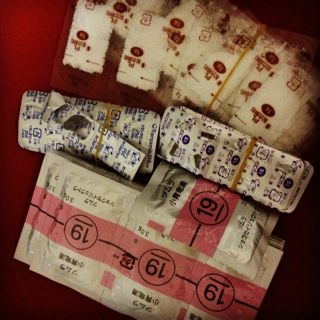 One Response to “Infection”

I have a family event to sing at soon, and my voice won’t behave.  As well as being out of practice I have a cold that makes me sound nasally.  I have been using vocal exercises to try to strengthen the lower end of my range but I got bored singing “ne-aw” and “me-may-ma-moo” and decided to use one verse of Summertime as an exercise instead.  That way I got to sound less like a donkey, or at least I hope I do.