I have rarely been delayed when flying out of Tokyo.  But on Friday the runways of Haneda airport were closed because of an engine fire on a Korean Air flight.  Inside the airport this information was not given out.  At first we weren’t given any reason for the flight delays and then there were announcements about runway closures and air traffic control problems, but nothing specific.  I assume they think that passengers will panic if they hear about a problem on a plane.  Of course, most of the passengers knew anyway, thanks to the wonder that is the Internet.

The delays wasn’t as bad as I feared and at one point I was hopeful that I would make my connection in Frankfurt.  But once we got to Frankfurt the plane couldn’t land as that airport was closed due to a storm.  We ended up being flown to Leipzig where we refueled and waited to fly back to Frankfurt.  Once we got to Frankfurt there was the usual chaos of hundreds of people with missed flights not knowing what they were supposed to do.  The staff at the airport were not that good at giving instructions and I ended up queuing in the wrong place for a while.

I did eventually find the right place and queued for my hotel voucher and for information on when my flight was rescheduled.  It is not pleasant trying to do this after being on a flight for more than 14 hours.  But at least in Europe they sort these things out.  If I had been in America I would have been told that the airline was not responsible for the storm.  They would have rescheduled my flight, but they would not have sent me to a hotel.

By the time I got to the hotel they also had a large queue of people waiting to check-in.  It was midnight, 22 hours after I had left home, when I sat down to eat dinner.  It was a rather strange buffet meal with lots of things I couldn’t identify.  I was a little disappointed, as the airline had told me I had 30 EUR for dinner, to find out I could only use it on this buffet and couldn’t have a la carte items, room service, or even anything to drink.  I was hungry though so I had an odd schnitzel like thing and some rice – hardly anything that should cost 30 EUR.

The hotel room was lovely and I did manage to get five hours sleep before having to get ready to go back to the airport.  It is horrible wearing the clothes that you travelled in for a second day, but my suitcase was in transit. The airline paid for taxis to and from the hotel and I got to experience the speed that people drive in Germany.  I don’t mind that they drive fast, I would just like them not to use one hand to hold a mobile phone while they are doing it.

In many ways the rest of the trip was uneventful, and I was incredibly glad to arrive in Dublin on Saturday afternoon.  Though not overly thrilled that I then had to get to Belfast, but at least the bus ride through the country is beautiful.

I am finally starting my 2 month trip.  The packing took longer than I wanted.  It’s no fun trying to work out what clothes to put in one suitcase when the weather is going to range from 6 C (42F) to 36 C (96F).  I’m at Haneda Airport and I’m already concerned that I’m going to need to buy a coat in Belfast.  It’s 21 C (70F) in Tokyo at the minute and I’m a little cold, probably because it’s also raining and I got wet on the way to the airport.

I don’t have room for bulky clothes for the cold.  Northern Irish summer is not hot, but I decided that being cold was better than dragging a second suitcase around the world.  I may regret that.

It’s the morning after the last performance of Big River.  I’m in that post performance daze where it seems hard to believe that 6 months of work is over.

There were many new experiences and challenges working on this project, but the stand out thing was the people I worked with.  I was incredibly impressed by the director, stage manager, and the production team.  It made such a difference working with people who had a strong vision for the show and were competent in facilitating that.  I loved how the cast worked together.  We had a story to tell and everyone helped each other tell it.  There was a lot of love and support and a real feeling that we wanted each other to succeed and perform to the best of our ability.  It was also a joy working with the incredibly talented musicians.

I was surprised by how much I enjoyed working with costume and wardrobe.  My sewing skills are basic, but I did manage to make my own costumes and some other pieces.  I discovered that ironing costumes in the theatre before the rest of the cast arrived really helped with the anxiety I feel before performing.  Actually, all the costume work did.  Having cast members come to me because they had lost their hat or their apron gave me something to think about other than the fact that I was going to have to perform in front of an audience.  I don’t do well if I have to sit still.

Acting with an American accent was a challenge.  I have no idea if I was any good at it, but I tried.  One of my friends who came to see the show appeared stunned by my performance saying that they had no idea who that woman was on the stage, but she wasn’t me.  I’m going to take that as a compliment as I’m not an old, American, shrewish spinster. 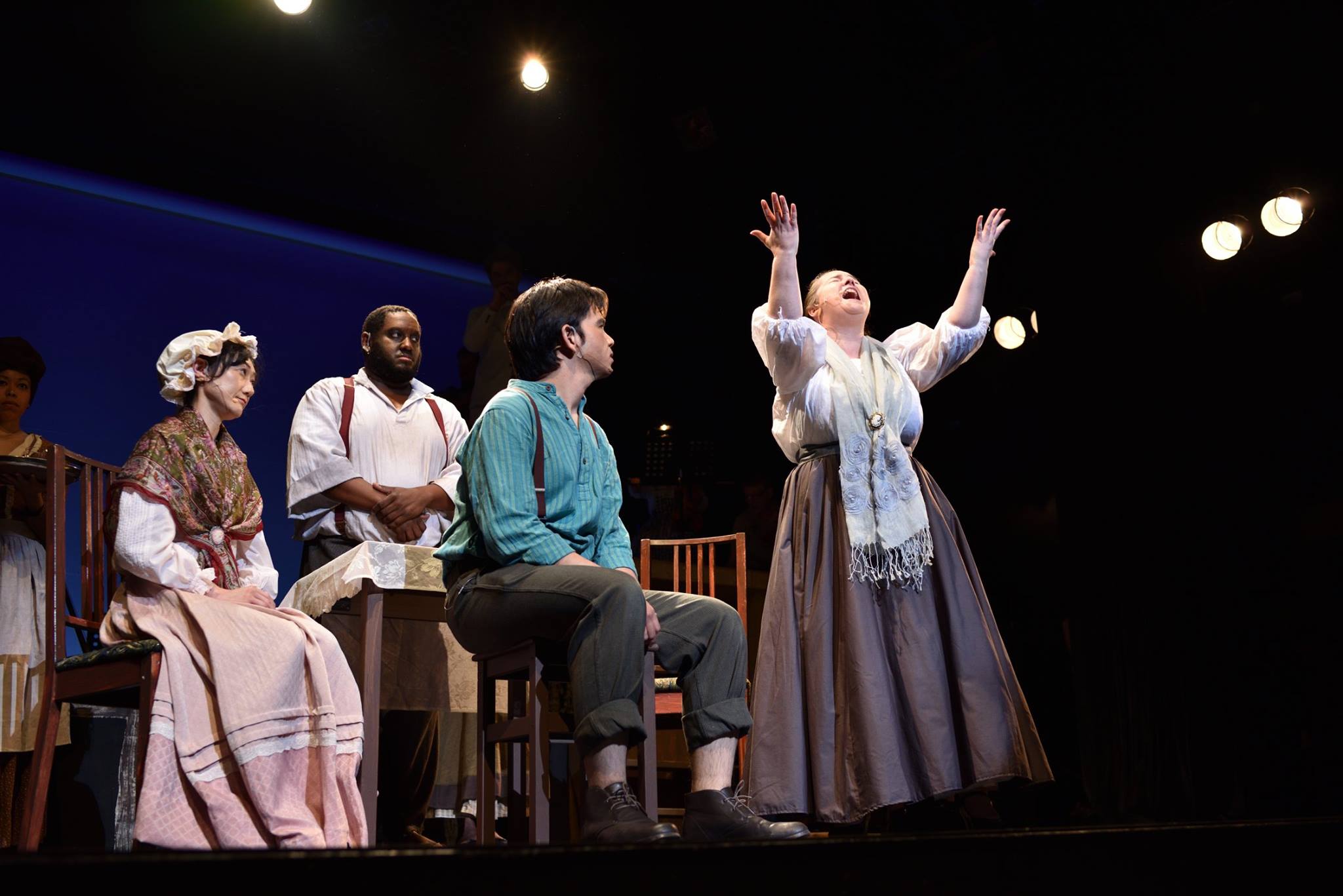 Photo of “Do Ya Wanna Go to Heaven”, by Teruaku Ito

It was the first time I was involved in dramaturgy as I wrote a short piece on the historical context of the play for the program.  I didn’t know what the word “dramaturgy” meant when I was first asked to do this, but I was happy to try and I did enjoy researching the history of the 1840s in America.

So for now I will find a place to keep all the lovely notes and mementos I received and I’ll take a break from theatre.  It may be the end of my journey down the river, but it’s much too soon to know which parts of my own journey are only beginning.

I have been busy rehearsing as part of the ensemble cast of Big River.  The musical opens on the 19th May, so not long to wait now.  The city is getting warmer and I am finding it hard dancing in layers of clothing in hot rooms.  It will be hot on stage, so I will just have to get used to it.  I am so glad that during the performance each dance only happens once, unlike rehearsal where the point is to keep doing them until they are right.

It’s been fascinating doing theatre work again as technology has changed so many things.  Now rehearsals are organised with web-based project management tools.  Nearly every cast member is carrying a device capable of recording the rehearsal.  Choreography steps are videoed so you can review them at home.  There are apps to help you run lines.  And microphones are everywhere.  I’m not completely thrilled about the microphones, as it changes vocal technique, but I love most of the other changes.  Now if we just had air conditioners that didn’t dry out the throat…