Given how often I write about food you won’t be surprised to learn that there are loads of things that I want to eat in Japan but can’t.  Ovid was writing today about things that he craves, and gives a recipe for something called rice-a-roni.  I have never eaten that, or even heard of it before I read his post, but I have certainly spent quite a bit of time this year learning to cook things that I crave and have learnt how to substitute food.  Only yesterday I made a Shepherd’s Pie with minced pork instead of minced lamb.  I think Marty called it a “pig herder’s pie”.

Sometimes though a substitution won’t do.  I wanted to have roast parsnips with our Christmas dinner.  I had managed to find a small turkey, ham, and frozen sprouts at an online butcher but I was craving parsnips.  I tried researching this online and came across tales of people growing their own but that wasn’t something I was going to be able to do before Christmas.  I thought that I might be able to find these at the Costco in Saitama.  So we hired a car and went on a parsnip hunting adventure, but there were no parsnips.  I did manage to buy baby carrots, a box of potatoes, and some Quaker’s Oats.  (Potatoes are normally sold in packets of 3 or 4 in Japan so being able to buy a box of them that weighed 7 pounds was fairly amazing.)

Then, whilst at a housewarming party, someone else started to talk about parsnips.  They claimed that I could buy them at Nissin World Delicatessen in Azabu-juban.  I have shopped there before and have never seen a parsnip but fruit and vegetables are seasonal and it’s certainly the right type of shop to buy something like a parsnip.  Alas, there were no parsnips. The shopping trip wasn’t wasted as I bought sweet mince, caster sugar, and Walker’s shortbread.

I had to give up on having roasted parsnips as part of my Christmas dinner but I was happy enough as this was the first time we managed to cook a turkey in Japan.  2010 might officially be the year of the tiger but for me it was undoubtedly the year of the oven.

One Response to “Missing Food”

Christmas is strange in Japan.  It’s not a holiday and it’s not celebrated in any religious way but it’s still well known.  It reminds me a bit of Valentine’s Day only with Christmas symbols and elevator music.  I found it difficult walking around the local supermarket as it sounded as if a tribe of smurfs had been let loose to sing bad Christmas music.  It may not have been so bad if they had only played one song at a time but they have a fondness for placing CD players in different parts of the store so each section can have its own competing music.

Christmas food exists, though it’s not turkey and ham.  There is a Japanese Christmas cake, which is a light sponge covered in cream and strawberries.  And then there is Christmas fast food.  Mos Burger runs an X-mos burger campaign but this pales compared to KFC’s Christmas food.  KFC has its own version of Christmas dinner with party buckets and roast chicken.  We had friends staying for Christmas and thought it would be fun to have KFC on Christmas Eve.  We had to book this weeks in advance and even then there was only one free time slot.  Over Christmas KFC doesn’t sell its usual food in the evenings but opens for collections of pre-ordered Christmas dinner.

We ordered an eight piece party bucket and a roast chicken.  The chicken was surprisingly good though the gravy was a little strange. 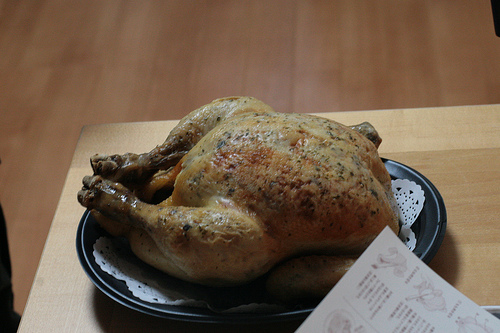 I decided to get out my list of 101 things to do in 1001 days as it’s nearly the end of 2010.  I have many ongoing items that involve me doing things on a monthly or weekly basis.  Most of these, especially the cooking ones, are going well.  But I have fallen way behind in my writing in both English and Japanese.  Of the 57 one-off tasks I have managed to complete 14 in the past year.  Maybe 2011 is the year I’ll manage to complete the task that says, “be able to do 100 consecutive push-ups”.  Then again, maybe not.

Even though I found it time consuming making festive biscuits I decided last night that it might be fun to make gingerbread men.   Actually I decided I could teach Marty how to make them.  Once I taught him how to rub butter into the flour he was able to make the dough and was successful baking his first batch.  It’s much easier making biscuits when you get someone else to do it for you. 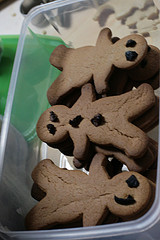 After my success with baking cakes I thought I would try making festive biscuits.  That may have been a mistake.  It could just be the recipe I picked but I found the dough incredibly hard to work with.  It was made with almonds, sugar, butter, and flour.  The thing this most reminded me of was crumble mix and my dough was certainly crumbly.  So crumbly that the stupid thing wouldn’t roll out without falling apart.

The biscuits also involved two layers of stars that needed sealed with a filling.  Seriously, after all the messing about with them my back aches from  leaning over the table.  Now that they are out of the oven and have cooled down I know that they taste great, but I’m not sure having 14 biscuits was worth all that effort. 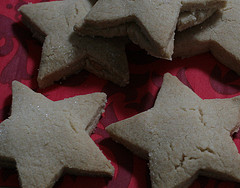 I have always said that winter is my favourite season.  When summer comes, bringing heat and humidity, I wonder what it would be like to be the White Witch and always have winter with me.  But last winter I encountered a problem as thyroid disease doesn’t like the winter at all.  It’s nearly winter in Tokyo and instead of looking forward to the cold, bright days, I have begun to dread the decline in my health.  I already need to sleep more and my joints ache.

I have been told that in some countries they increase thyroid medication over the winter to cope with the natural seasonal decline but they don’t appear to do that in Japan.  Well, they didn’t do it last year.  Maybe they will surprise me when I go to the hospital tomorrow.

I’m finally back home.  I was hoping that December would be the month when I managed to get back into a routine for blogging but that hasn’t worked out so far.  I spent the first 30 hours of December making my way back to Tokyo.  And with the changing of time zones I lost the 13 hours I had gained in November.  This does mean that the start of the month was a bit of a blur and I’m really surprised that it’s the 7th December already.

December is going to be a busy month with visitors and holidays.  I’m hoping that at some point things get back to normal, but I’ll admit that I no longer have any clue what normal is.