I was once asked what we do in the West to ensure that all our Christmas cards arrive on time.  I wasn’t quite sure what I was being asked.  Arriving on time usually means arriving before Christmas Day and that’s not that difficult to do.  But the person who asked the question was Japanese and they were referring to the fact that in Japan New Year’s cards are meant to arrive on New Year’s Day.  To facilitate this the post office will have a special box for the cards and an army of postal staff who work on New Year’s Day.  But we don’t expect Christmas cards to arrive on Christmas Day and we wouldn’t wish the task of rushing around to deliver them on anyone other than Santa.

I don’t even think that the cards need to arrive before Christmas.  I received another card in the post today and it’s lovely having the part of the holiday that involves hearing from friends and family extended. 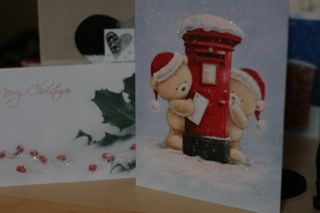 Last year we decided it would be fun to have a traditional Japanese KFC Christmas dinner.  This year McDonald’s has started to offer a Christmas box set, though we weren’t tempted to try this.

Last year I hunted for parsnips to roast for Christmas dinner, but I couldn’t find them.  This year I’ve found them at Nissin World Delicatessen but I’m not going to buy them.  I do love roasted parsnip but they were 280 円 (€2.70 EUR, £2.20 GBP, $3.58 USD) per 100 grams! If I was making dinner just for myself I may consider a special parsnippy treat, but would my guests really like it that much?  I’m just back from Europe and I find myself converting currencies when I look at prices.  You can imagine how horrified I was when the one parsnip I picked up was 691 円 (€6.80 EUR,  £5.60 GBP, $8.81 USD).  Who would expect the vegetables to cost more than the turkey? 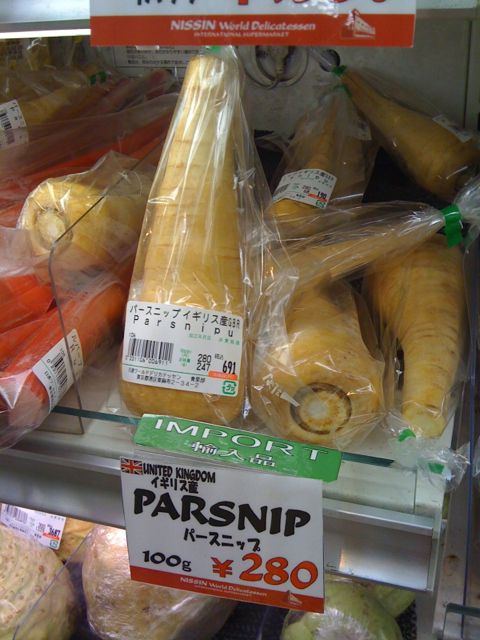 I’m waiting to board a flight, which is a dull way to spend an afternoon.  Given how often I do this you’d think I’d be good at it, but I keep watching the clock wishing time would move faster.  I have another couple of hours to wait in the airport before boarding a plane to wait about 11 hours for it to land in Tokyo.

I know it can be expensive to buy drinks in a restaurant in Japan but I can still get surprised.  On Saturday I went out for pizza in Akihabara.  I decided to order some cola as I was tired and thought that maybe the caffeine would perk me up.   The drink I got was in a small glass, probably around 200 mls, and it cost 400 円 ($5 USD, £3.20 GBP).  It was ridiculous.  I knew how much the drink would cost before I bought it but I wasn’t expecting it to be so small.  My friend ordered a glass of white wine.  He got about the same amount of wine and it was cheaper than my soft drink.  Next time I’ll stick to drinking tap water.

One Response to “Drinking Out”

Somehow I forgot to blog in November.  It was a busy month and I don’t write as much when I’m travelling.  I also haven’t been overly well, which is probably the fault of my out of control thyroid hormones.  I was at the hospital this week and had the worst set of results in three years.  The doctor wasn’t exactly sure what has gone wrong, but one explanation was a consequence of the March earthquake.

When I went to the hospital in June I was given a different brand of medication.  It was supposed to be exactly the same thing only made by a German company and not a Japanese one.  I couldn’t completely understand what had happened with the old medication but there was some issue with the hospital being able to get their supply after the earthquake and the German supplier stepped in to help.

My doctor told me that some patients had problems with the German brand and that it’s possible that my medication hasn’t been absorbing properly for six months.  It would certainly be odd to blame the earthquake on my insomnia or to say, “really it’s not my diet, the earthquake made me fat”.  It is just one explanation though.  The other ones involve the disease progressing faster than expected, winter badly affecting my hormones, having some sort of viral infection, or my immune system weakening.  Horribly, whatever is happening is probably caused by a whole combination of factors.  I just wish that when things go wrong they could be corrected faster, but it will be four months before the next set of tests, and it could easily take a year to get back to where I was in June.  This could be a long winter.

One Response to “Unexpected Consequence?”