Last week I attended YAPC::Asia in Tokyo.  I’m always impressed by how much work the organisers put in to make sure that the conference runs smoothly.  I have been to 10 YAPCs in Tokyo and every year they get bigger.  Back in 2006 there were around 320 people attending and this year there was 2130!  That’s amazing growth and a headache for conference organisers unless you successfully scale every aspect of the conference.  Just thinking about the wifi requirements alone makes me shudder.  There is no doubt that Maki-san and his team should be proud of everything they have achieved.  It was a great conference.

The venue is so important to holding a good conference.  Last year I felt that the venue for YAPC::Asia was too small but this year it was perfect.  It was large enough to be comfortable, but not so large that you felt disconnected from the other attendees.  The main room was beautiful.  It held around 1000 people, but since it seems that only about half the conference at most will attend a plenary session it was a good size. Given how many attendees there were I didn’t get to see everyone I know.  This is always a problem when a conference is large and if I had not been jet lagged I probably would have been more proactive at trying to meet up with people.

I have attended many conference and I dislike how organisers who are intimately involved with the conference forget that the rest of us have not spent months contemplating the venue and the rooms.  I have joked that for some conferences it’s a quest to find the clues to work out where the entrance to the venue will be and how to find the talks.  Thankfully at YAPC::Asia this is never a problem.  There are always beautiful signs, printed material, and even a video showing how to get to the venue from the train station.  It was wonderful that I could feel confident about getting to the venue.  I really don’t want to keep the keynote speaker who is staying with me late for the opening because I can’t find out where to go.

YAPC::Asia is the only conference I attend that it not in English.  There were a number of foreigners speakers who spoke in  English.  At earlier conferences I did notice that the English talks were not overly well attended but now they are simultaneously translated into Japanese, which really helps.  It would be amazing if the Japanese talks could be translated into English but it’s not cost effective to do that given the number of non-native Japanese speakers in attendance.  My Japanese is not good enough for me to easily enjoy a technical talk given in Japanese so I mostly went to hear people speak in English.

I enjoyed Rik’s talk and would recommend it to anyone who is interested in the current release of Perl 5.

While the conference has its roots in Perl – YAPC stands for Yet Another Perl Conference – there is no doubt that the content of this conference has been expanding for years now making the “P” more polyglot than Perl.  I did hear a number of Perl talks but I heard an equal number of container talks.  I enjoy hearing talks from speakers I don’t know and on new subjects, but I do like more Perl in my YAPC.

I could write more but Maki-san has already written a great post on the conference.  I’m sad that this will be the last one, but I’m hopeful that something new will spring up in its place.

I am still travelling.  I’ve been away from home since the start of June and I won’t be home for a while yet.  Today, I’m singing at my cousin’s wedding.  I’m a little nervous about that.  At the start of the trip I attended my niece’s wedding, and my trip will end with a friend’s wedding.  Weddings are wonderfully happy occasions, and once the singing is over I’m sure I’ll have a great time today. 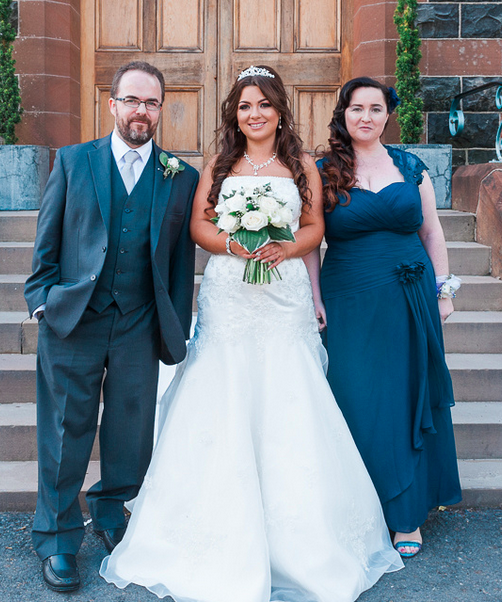 Marty and me at our niece’s wedding.