I flew from New York to Dublin yesterday. I was fortunate to be sitting beside two friendly people, Katie from L.A. who was flying to Ireland for her summer holiday, and an Irish man who was heading home after a technology conference.  Katie was excited about her trip.  She hadn’t done much research, but she had a smart phone with GPS and the internet, so really didn’t think it was needed.  She told me she would be happy as long as it was green and there were castles and distilleries. It certainly has those things, so we smiled and chatted about food, one of my favourite Irish things, and the beautiful places she could visit.

As usually happens I got cold during the flight.  But I travel with a blanket and while Katie was admiring my fluffy Disney blanket we talked about our mutual dislike of being cold.  It turns out she was the sort of person who feels cold when others feel warm.  She joked about wearing 7 layers of clothes when her friends went out in shorts and t-shirts.  The Irish man asked if she had brought jumpers to wear on holiday.  She didn’t know what a jumper was, as it’s not an American English word, so I told her it was a sweater.  She had brought one, but it was summer, surely she wouldn’t need them?  Ah, the Irish man said, so you don’t know what it is that makes Ireland so green.

As we were landing the captain announced that it was 44° F (7 ° C) in Dublin.  She said to me, “did he mean 44° C?”.  He, of course, did not.  It was cold yesterday morning, colder than L.A. in winter, and even cold for an Irish summer. Katie was horrified.  We told her to find a Primark and to buy some cheap winterish clothes so that she didn’t freeze.

It’s still cold today.  I have been avoiding the rain and the wind.  It’s about 52° F (11° C) and after my week in New York of average temps. around 86° F (30° C), I’m cold.  My Mum’s washing is forlorn.  It hangs through wind and rain until eventfully the weight of the water drags it from the line.  I have not worked out yet why she bothers and there seems to be an endless cycle of rewashing clothes that become dirty on the line.  I think that she is an optimist and hopes for sun, it is summer after all, but today that seems a far fetched dream. 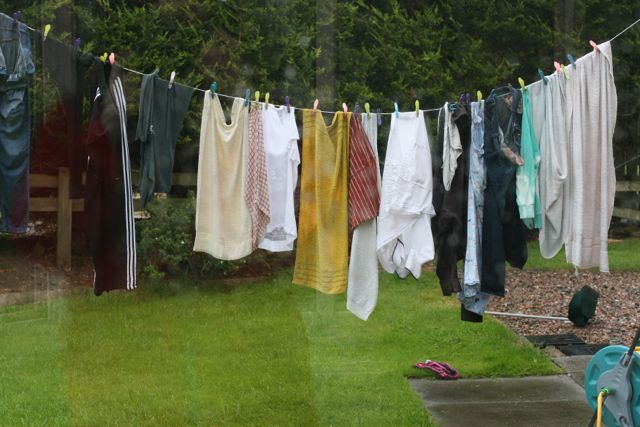 Washing in Rain – but look at how green the grass is…

I couldn’t help but overhear your conversation tonight and your contemplation as to why you might be still single in your 30s.  I know you didn’t ask for my advice, but here is some anyway.

Yours, K, who wishes she could tune out background noise.

I finally managed to get to the Highlands of Scotland.  It was remarkably beautiful. I had been told it was like Ireland, but the landscapes are vaster, the mountains are higher, and the glens are wilder.

I sold the trip to my friends by describing it as a hunt for Nessy, but she was notably absent during our trip.  Mind you, Loch Ness is impressive all by itself and doesn’t need a mythical monster for it to be worth a visit. 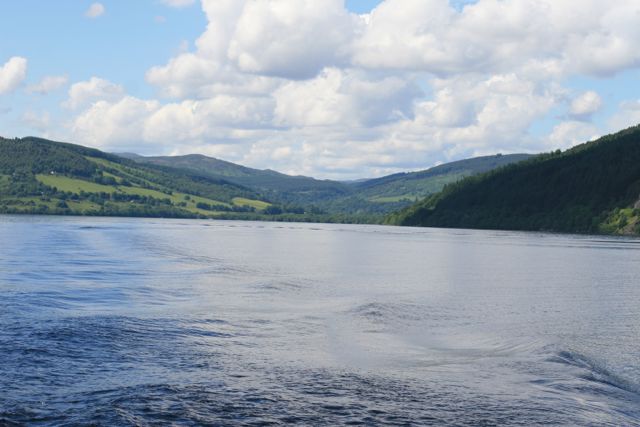