We didn’t bother dressing up for Hallowe’en this year, but we did put a lot of effort into our costumes for the Danny Elfman concert we went to last weekend. I wasn’t sure what characters we should choose, but in the end I settled on “Beetlejuice” as Marty looks more like Beetlejuice than he looks like any of the characters that Jonny Depp has played.  I was able to buy a costume for Marty, but I made my own.  I ended up feeling like I was drowning in tulle. The 20 metres I bought isn’t really enough for anything other than a fake wedding dress, but it took over my apartment. 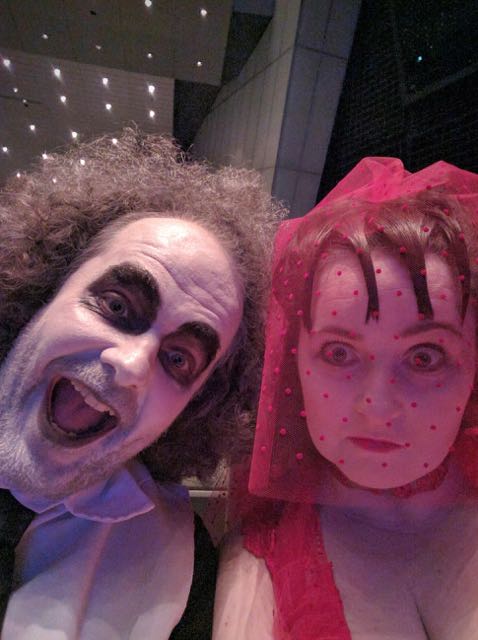 The concert was wonderful with music from many Tim Burton movies including “The Nightmare Before Christmas,” “Beetlejuice,” “Batman,” “Sleepy Hollow,” “Edward Scissorhands,” and “The Corpse Bride”.  I love the music from “Edward Scissorhands” and it was great to hear it performed live by a choir and orchestra.  Sandy Cameron, the violin soloist, was amazing.  I didn’t know that Danny Elfman sang and was very impressed with him singing the role of “Jack Skeleton”.  I also liked the multi-media presentation that was shown along with the music with many beautiful concept drawings of the various characters.  It was a great night out.

So much work goes into putting on any production.  I was only involved in Macbeth for the past few weeks and it took over my life.  For the production team who have been involved since the inception of this project I imagine it’s taken up a huge part of this year.

The show was visually beautiful with a stark, clean aesthetic. I worked with a team of sewers, lead by costume designer Sara Ben-Abdallah, and made some of the garments she created. 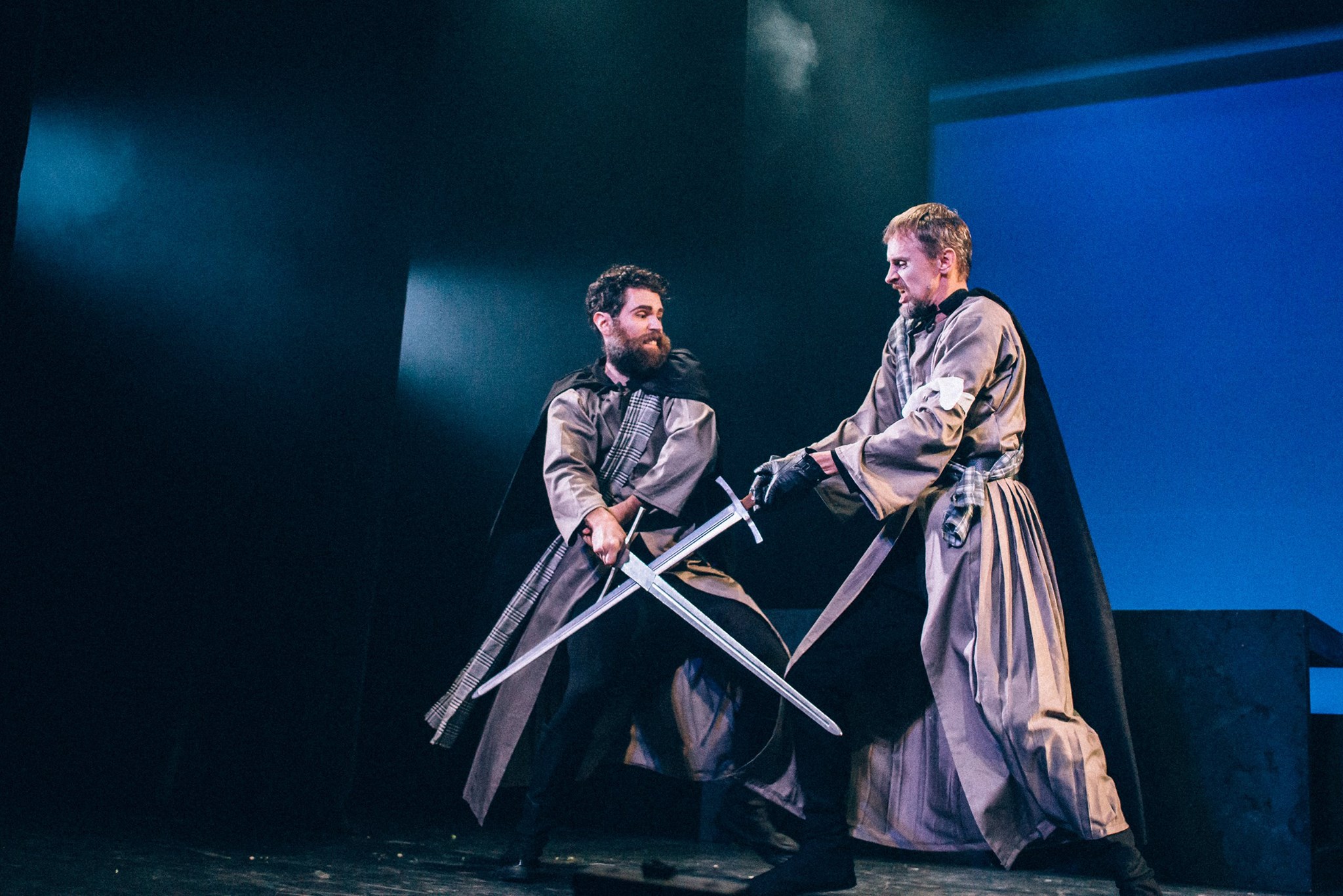 Fight scene between Macduff and Macbeth – image by John Matthews

The pleats, that I spent quite a bit of time stressing over, looked great in the final pieces.

2 Responses to “The Costumes of Macbeth”

I was recently asked to make pleats for a costume.  I had no clue how to do this so I tried watching instructional videos on youtube.  Eventually I could make pleat-like things but not something good enough for the costume.   Marty has never used a sewing machine before and never made pleats.  He watched one video on youtube and from that he was able to sew pleats.  He’s amazing! 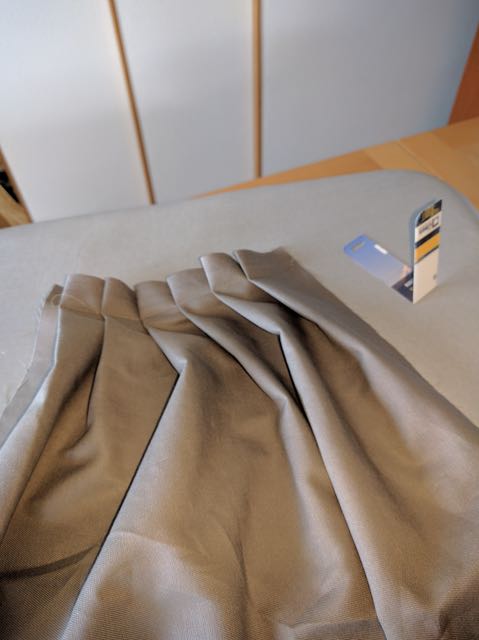 He didn’t use a fork, like they did in the video.  Instead he made himself a plastic pleater using a badge from a linux conference.

Once he made the pleats, I attempted to iron them.  The material was more than 1 metre long and they were really hard to iron, but in the end I got the panels I need to insert into my costumes. 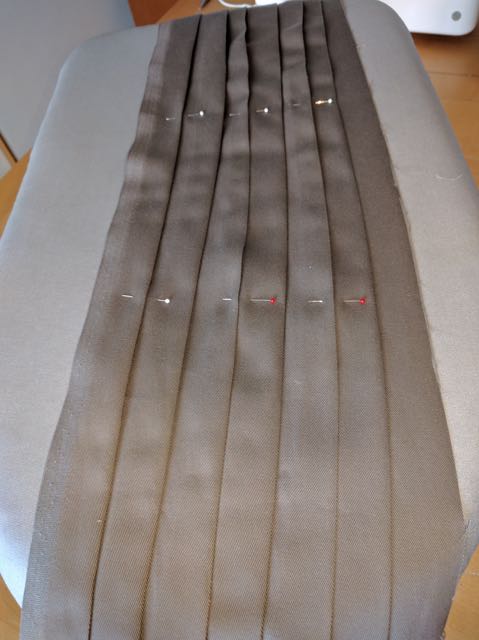 We were playing a game that involves one person trying to tell a story, while their partner prompts them with random words that they have to incorporate into that story.  It was my first ever improv exercise and I was paired with the teacher.  He started his story and the first word I gave him was “rain”.  He skillfully told a story but after a while he stopped and said to me “you really should provide words quicker”.  I was puzzled as he had never used my word in the story and I was only supposed to provide a new word when the old one was used.  Turns out he thought I said “ring”.  I forget sometimes that my accent is uncommon and that in Northern Ireland “rain” could sound as if it has two syllables and not the one the rest of the world claims it has.

I have been attending weekly improv workshops, run by Tokyo Comedy Store, since I got back to Japan in August.  Improv is not something I find easy.  Performing, without preparation, can feel horrifying.  I do enjoy some of the games, and the people who attend are incredibly helpful and welcoming, but I think it’s going to take me a while to get used to the concept.

Had I the heaven’s embroidered cloths,
Enwrought with golden and silver light,
The blue and the dim and the dark cloths
Of night and light and the half-light;
I would spread the cloths under your feet:
But I, being poor, have only my dreams;
I have spread my dreams under your feet;
Tread softly because you tread on my dreams.

Marty is going to be on stage for the first time in years.  He has a small part in Tokyo International Players production of Macbeth, which opens on October 13th.  I will be helping out with costumes and wardrobe, so hopefully I’ll still get a chance to watch the play.

I did see a scene, between Lady Macbeth and Macbeth, acted out last night at the Improvazilla Mainstage Show and it was excellent. 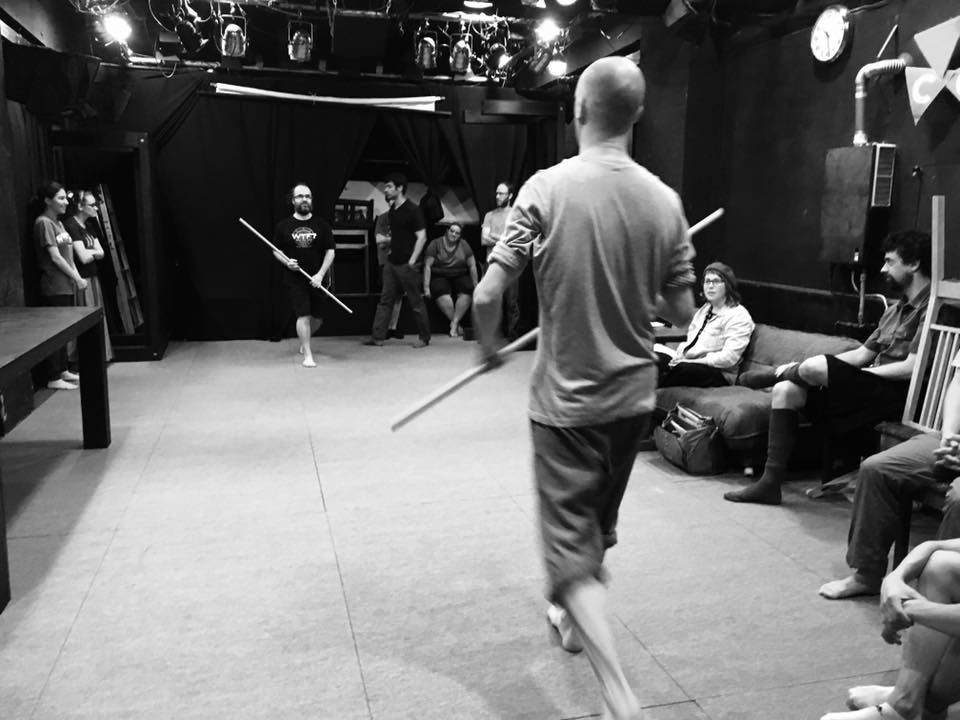 Marty, at rehearsal, about to fight with a big stick.