I’m in Manchester airport this morning and it’s really horrible.

When I arrived I couldn’t work out what terminal I needed to go to.  It didn’t tell me on my flight details and there were no obvious signs inside the airport.  I tried looking at the departure board but this was terminal specific and I appeared to be in the wrong terminal.  I ended up walking around for 20 minutes until I found a board that told me which terminal I was meant to be in.

To get to Terminal 3 I needed to walk between buildings.  This wasn’t a long walk but it nearly ended up being a dangerous one.  There are holes in the pavement on the pedestrian walkway!  The wheels of my suitcase got stuck in a hole and I nearly fell over.

Now that I’m in the right place I can’t check in for hours.  There are very few seats but I have been lucky enough to find one in a coffee shop.  I know that part of my horror is culture shock.  The floor is filthy and I’m expected to set my laptop bag and handbag on it.  I’m used to everything being so clean in Tokyo and even when it’s clean there are places to set your  handbag.

I’m also not in great form because I am going to have to put my handbag in my suitcase as I’m not allowed to carry on a handbag and a laptop bag.   This will put my over the allowed check-in baggage weight costing me 10 GBP per kilo (I hope my books aren’t as heavy as they feel.)

I’m surrounded by agitated people.  I don’t mean to overhear the conversations but something about the volume of the voices and the fact that I can understand the language makes it hard for me not to hear them.

The people look miserable.  It doesn’t seem to matter if they are passengers or airport staff.  Everyone looks like they wish they were somewhere else.  I’ve just glanced up from my computer and the guy working in WHSmith is scowling  at me.  It’s probably just the look he constantly has on his face working here.  I’ve no idea what sort of look I have on my face and thankfully there are no mirrors about to show me.

Last summer the hard disk on my MacBook died.  At that time it was just over a year old.  And now to celebrate its second birthday the hard disk has died again.

Although it makes me sound like a stereotypical geek I found it really hard to do anything without a computer.  The only task I seem to do without one is housework.  And that’s not completely true as I like to play music when I clean, which was stored on my computer.

It took forever to do my Japanese homework without an online dictionary.  I couldn’t work on my sewing or knitting as the patterns are online.  I couldn’t make an appointment at the beauticians because I do this online.  I was restricted in what I could cook for dinner as I didn’t have access to my recipes.  All these things were annoying but the feeling of being trapped in Tokyo with no way to communicate with anyone outside this city was horrible.

The two days offline made me realise that I need a second computer.  I really like my MacBook but having two of these doesn’t seem overly sensible.  Back in April Marty tried to convince me to buy a netbook. I could see why it would be useful to have one but my desire to own one wasn’t as strong as my reluctance to try something new.  After two days of being offline I rang Marty at work and asked him to please buy me a netbook on his way home.

I’m not sure what I think of my new HP Mini but it’s so much better than being computerless.

It turns out that I do less in the evenings.  I’m much more inclined to sit on a chair and watch a DVD.  I never want to do this in the morning.  This morning I got up at 6am.  I did some online things for about an hour and then I woke Marty up.  We went out cycling and had breakfast before he left for work.  It was a really pleasant way to start the day.

I’m not sure if I will continue to wake up like this as my internal clock will get messed up when I travel to Europe – but  for now I’m going to stop moaning and enjoy it.

As part of my education on American things my friends took me to the Big Butler Fair.  I’ve been to fairs before but we weren’t there to see the ferris wheel or the the dodgems.  We went to see a school bus demolition derby.  I had heard the phrase “demolition derby” but I wasn’t sure what it meant.  I knew it would involve destroying something but it never occurred to me that this would be the destruction of vehicles that people were driving. 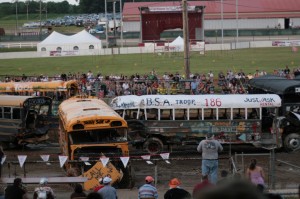 It was a strange experience.  Someone had mentioned heats so I thought that maybe 2 buses would compete at a time.   I was wrong.  There were two heats of 5 buses and then a final.  I still don’t know what the point of the heats was.  Maybe it was to try to eliminate some of the competition but all 10 buses were allowed through to the final.  (One bus broke down right at the start so only 9 buses actually competed.)  To win the competition you had to be the last bus running.  At the start it was quite tame.  The vehicles reversed into each other and slowed down if it looked like they would come close to the front of another bus.  But by the end it was viscious.  The rule about not crashing into the driver disappeared with the thrill of smashing up someone else’s engine.  What better way to stop a bus than hit it until the engine goes on fire?

There was something fascinating about the whole thing but the destruction and the possibility of the driver getting hurt made me feel a bit strange. But it was certainly a memorable way to end the 4th July weekend.

It’s been a while since I’ve attended a TLUG technical meeting.  I usually enjoy the meetings but I’m not that interested in Linux and sometimes the talk topics are too specific for me. Since Marty was speaking today I decided to brave the heat and humidity.  I really dislike summer weather in Tokyo but I can’t spend the rest of the month hiding in my air conditioned apartment. (I’ll be spending most of August in Europe.)

The other thing that sometimes stops me attending the meetings is that they are quite far away.  The public transport system is really good but it still took nearly an hour and half to get to the venue.  One day I’ll get used to living in such a large city and remember to ask in advance where exactly in Tokyo a meeting is going to be held.

At the start of every meeting every person is expected to introduce themselves.  This is not something I enjoy.  It’s obvious that at least 50% of the attendees are really uncomfortable having to do this.  It also ends up sounding like the opening of an AA meeting just with Linux Users.  “Hi, I’m X and I’ve been using Linux for X years”.

Marty gave a talk that he is planning on giving at YAPC::EU in August.  This is going to need quite a bit of work as it’s more than twice the length it should be.  At first I thought it was because he was having problems with the live demos but actually Marty always runs over time.  He gets so excited.  It’s obviously much more fun to jump around and draw diagrams on the white board rather than actually stick to the scheduled timings.

I’ll go and hear the talk again at YAPC::EU as I imagine it will be entertaining and by then the live demos will be fixed. 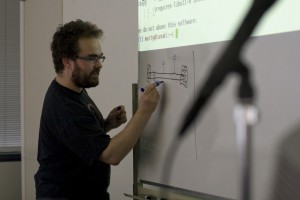 I wasn’t sure what to expect of the firework display in Pittsburgh on the 4th but it didn’t disappoint. It was loud, brash, and completely over the top.  Thirty minutes of firework mayhem that lit up the sky over the city. 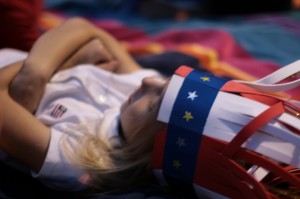 Watching the Sky Light Up

I always find it hard to sleep in a new place.  Last night I was trying to sleep at an airport hotel.  The bed was comfortable but the room made strange noises.  I could hear the sound of water running through pipes.  I could hear the electrical hum.  I could hear the fans used for cooling.   All of these are sounds I can cope with but the mystery creaking disturbed my sleep.  It’s not regular or rhythmic and I still can’t work out what is causing it.  I can’t even tell what direction it’s coming from (though that does suggest that I’ve been sharing a room with multiple creaky things.)

I turned off the air conditioning at around 3am, in case it was the culprit, but now the room is just hot and creaky.

I went to bed early last night.  I was so tired I forgot to set an alarm.  But I didn’t need this.  At the exact time I should have had an alarm fireworks went off somewhere in the city.  Good morning 4th of July!

I have not had a lot of time to blog lately.  I always imagine I will blog more when I’m at a technical conference but that’s just wishful thinking.  I realised yesterday that I hadn’t updated people on my whereabouts.  This led to lots of strange conversations as some of my family thought I was back in Japan.  But no, I’m still in America.

I’m going to be here for the 4th July.  Not sure what to expect but I imagine it will be fun.

2 Responses to “In Pittsburgh”