I am always reluctant to visit the doctor.  In the U.K. I was encouraged not to go to the doctor if I had a cold or a flu. It can be hard to know what exactly is wrong when I’ve had a bad cough and back in 2006 I got very sick when I didn’t have a chest infection treated quickly enough.  In Japan you are supposed to go to see the doctor as soon as you suspect you might be ill.  I have been trying to do this but I still worry that I’ll be wasting the doctors time with something silly.

Yesterday I went to see the doctor about my cough and he encouraged me to behave like the Japanese whilst I live in Japan.  He told me that it was better to be sure and pointed out that my cough was indeed bronchitis and treating it sooner was better.  He gave me four different types of medication, which is three more than I’ve ever gotten before.  I have antibiotics, something for the cough, some sort of expectorant, and a patch to help me breath at night.  I don’t really like the patch, as I was warned that it could make me shake, but I did manage to sleep last night.

I can’t imagine going to see the doctor for every cold or headache but I should probably stop worrying that the doctor will think I’m wasting their time when I do finally go.

Whatever it actually is it was still impressive at 31 metres in height. 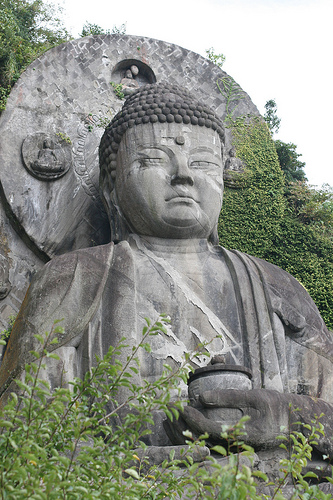 2 Responses to “Yet Another Buddha”

I gave my first talk in Japanese at YAPC::Asia last week.  It was a lightning talk, so I only had to speak for five minutes.  It was incredibly nerve wrecking even though I had spent hours practising.  I dread to think what my accent was like and I completely messed up one of my lines but I’m glad that I tried.  It also means that I have completed another item on my “101 Things to Do in 1001 Days” list.

3 Responses to “Speaking in Japanese”

YAPC::Asia is over.  Actually the conference ended over a week ago but for me it only finished when my house guests left.  Miyagawa said, “actually it gets over once you blog it, so if you haven’t, blog it now”.   I’ve been so busy that I haven’t blogged about anything in weeks, but it’s about time I said something about the conference.

YAPC::Asia is still the biggest YAPC in the world, this year with 518 registered attendees.  I don’t believe that they all turned up on the day, but there were still a lot of people there.  Well, a lot of men, as less than 3% of the attendees were female.

For me YAPC::Asia is very different than YAPC::NA or YAPC::EU.  At the other conferences the social aspect is very important but in Asia I have a language problem.  There is some sort of hallway track, though it seemed mostly a outdoor picnic track, but I wouldn’t easily be able to participate.  I also become much too tired to attend the evening social events as hours of listening to Japanese tires me out.  (Since moving to Japan I have nothing but admiration for the conference attendees and speakers I meet who are always dealing with their non-native language).

The conference is very quiet at the opening and becomes fairly noisy by the time the lightning talks begin at the end of the day.  Larry Wall opened the conference and I had to try not to giggle too loudly at some of his dreadful puns and word-plays as most of the audience was listening in respectful silence.  I have been told by speakers that it can be very difficult speaking in Asia as you don’t get a lot of feedback from the audience during your talk.  Jesse Vincent overcame that problem during his keynote.  He managed to get the twitter stream scrolling across his slides during his talk which made it one of the most interactive talks I’ve seen at a YAPC::Asia.

I’m always impressed by how much effort the volunteers put into organising the conference and there is no doubt that this conference was well organised.  This is one thing, however, that I would change.  There was no scheduled lunch break.  This meant that I left the conference at around 1pm and missed the talks that were scheduled at that time.  I don’t think this was really fair on the speakers as I imagine that many people left to eat lunch.  It also lead to a bit of confusion around what was happening at lunch as people tried to work out if there was a mistake in the schedule or not.

It was the last conference I plan to attend this year, and I’m glad it was a good one.