The musical opens in two weeks! I’m starting to see a number of interviews regarding the show.

The Metropolis one is interesting as they have interviewed the Director and Composer.

Ultimately, we’re a creative team of artists, and I’d like that our presentation of this domestic abuse story help audiences reach their own conclusions, allowing them to form their own productive discussions about what is a highly important and complex social issue.

As a director, I can use musical theater to be unpredictable and use techniques that reflect the reality of [victims] of domestic abuse as a kind of social message. A lot of victims suffer in secret and, although everything looks fine on the surface, they are concealing a lot of layers of pain and struggle. The music in “Disturbance” is often very beautiful and some scenes begin almost comically, but as we invite the audience into this world, the darkness under the characters’ facades begins to unravel.

I am working on a new musical called Disturbance that is being adapted for the stage by Rachel Walzer. The production is based on the book of poems by Ivy Alvarez, with music by Tony Award-winning producer Mark Ferris.

The book is based on a true story of domestic violence where a man killed his wife and son, before killing himself. The poems feature various family members and those involved in the aftermath of the tragedy, such as the neighbours, police officers, and estate agents.

​I have been working on vocal arrangements and on teaching the songs to the cast. This is the first time that I’ve worked directly with the composer of a musical and it’s been an exhilarating experience. I will also be performing as part of the ensemble.

One Response to “Disturbance”

It’s almost a week now since the final show of Chitty. It was a more tiring experience than I was expecting, and I still don’t know how I feel about it. It was the first time I had attempted to direct such a large show and I know that once I get over the tiredness I’ll be happy with the achievement.

I am grateful that the performance was well received and that we had a good audience. The cast and crew put in an amazing amount of effort and I was very fortunate to get to work with them.

As a volunteer organisation it’s not surprising that everyone ends up having to do more than one job. I sorted out most of the costuming for the show myself, and given the time and budget constraints I ended up borrowing as much as I could and buying pieces overseas. In the end I was happy with how the cast looked, though it was not an easy task, nor one I want to do again anytime soon.

It won’t be long now.

This year, I am failing at Christmas.  My little Christmas tree is sitting forlornly without ornaments, none of my presents are wrapped, and my cards are not written.  Living in a place where Christmas is not a major holiday does not help as I have many other distractions.  I did manage to buy a turkey, as I do want to eat turkey on Christmas day, but given how expensive they are in Tokyo I did consider doing without.  I’m hoping once I finish working this evening that the Christmas spirit will kick in. 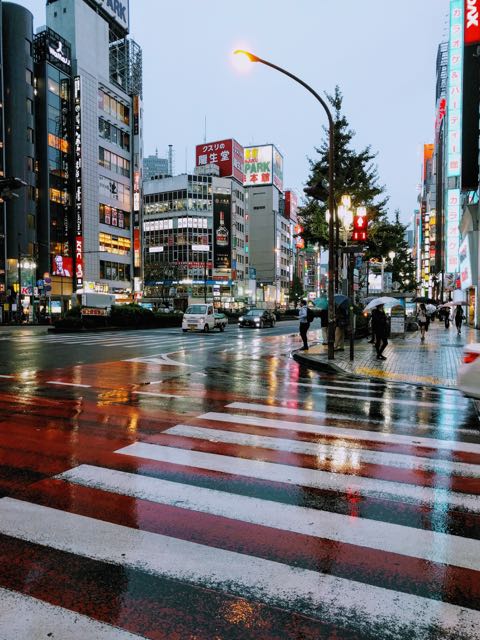 I will be directing Chitty Chitty Bang Bang, as the season finale, for Tokyo International Players.  The production will run from May 16-19, 2019 at Theater Sun-Mall in Shinjuku.  I’m nervous and excited about the production.  And the auditions are happening in November!

This summer I performed my first Shakespeare soliloquy.  In my quest to learn more about theatre I decided to attend a course on “Acting Shakespeare” at the Royal Conservatoire of Scotland.  It was hard for me to pick a speech to learn as Shakespeare’s work is very well known and that comes with lots of expectations about the performance.  I really didn’t think my first attempt should be Lady Macbeth or Hamlet.  I also found it hard to find a female role that I connected with, so I picked a man, Berowne, from Love’s Labour’s Lost.

It was much more like acting through song than I was expecting.  I often tell singers, in musicals, that they need to find the reason why they start singing, and with the soliloquy I have to find a reason why I’m going to start talking to myself.  Of course, you aren’t really talking to yourself, you are talking to and connecting with the audience.  And that is just like a good solo song performance.  It was also physically challenging and I felt quite unfit.   It requires a lot of energy to perform heightened text, to be real but not natural.  You have to work hard to get across the meaning of the text with your voice and body, as many people struggle to understand Shakespeare.

I have been working on many different aspects of theatre, some of which I have no interest to try again, but I enjoyed Shakespeare.  The words are beautiful, the stories are timeless, and since the works are in the public domain there is a lot of scope to be creative.

All the world’s a stage and all the men and women merely players. They have their exits and their entrances; And one man in his time plays many parts. — Jaques, As You Like It

I do like to get back home, but it will take me a while to adjust to the climate and the time zone.  Today my brain is fuzzy, but I’ve started to work on my plans for next season.  My life now revolves around our theatre season which, after a summer break in August, is back with a vengeance.

In the coming months I will be working on the music for Tokyo Theatre for Children’s (TTFC) Big Bad Musical, TIP’s production of the Good Person of Szechwan, and TIP Youth’s two musicals.  I’ll also be performing in the TTFC show.  The first rehearsal is tomorrow, so I had better try to get to sleep before 4am.  The joys of jet lag.

I have escaped the unbearable heat of Tokyo for the much cooler weather of Northern Europe.  It is 14 C (57F) in Glasgow this morning.  Thankfully I am staying close to where I will be studying Shakespeare, so I should cope with the cold.  In preparation for the course I have been learning a 3 minute monologue from Love’s Labour’s Lost.  The language is tricky, but hopefully I’ll be able to recite it tomorrow morning.  Acting it will take quite a bit longer.

Come on then; I will swear to study so,

To know the thing I am forbid to know;

July has been a month of horrible heat.

“At least 65 people have died in the blistering heat since early July, but the actual figure is thought to be much higher.

More than 22,000 people have been taken to hospitals with heat-stroke symptoms, Japanese officials said. In the city of Kumagaya, temperatures soared to 106 degrees on Monday, the highest temperature ever reported in the country and nearly 12 degrees hotter than average July temperatures. In Tokyo, the heat reached 104 degrees.”

I have been doing my best to stay inside as much as possible during the last couple of weeks, or only going outside when the sun is down.  It’s a little cooler today, but then typhoon Jongdari is on the way.